Leonardo Bistolfi – Head of a Philosopher 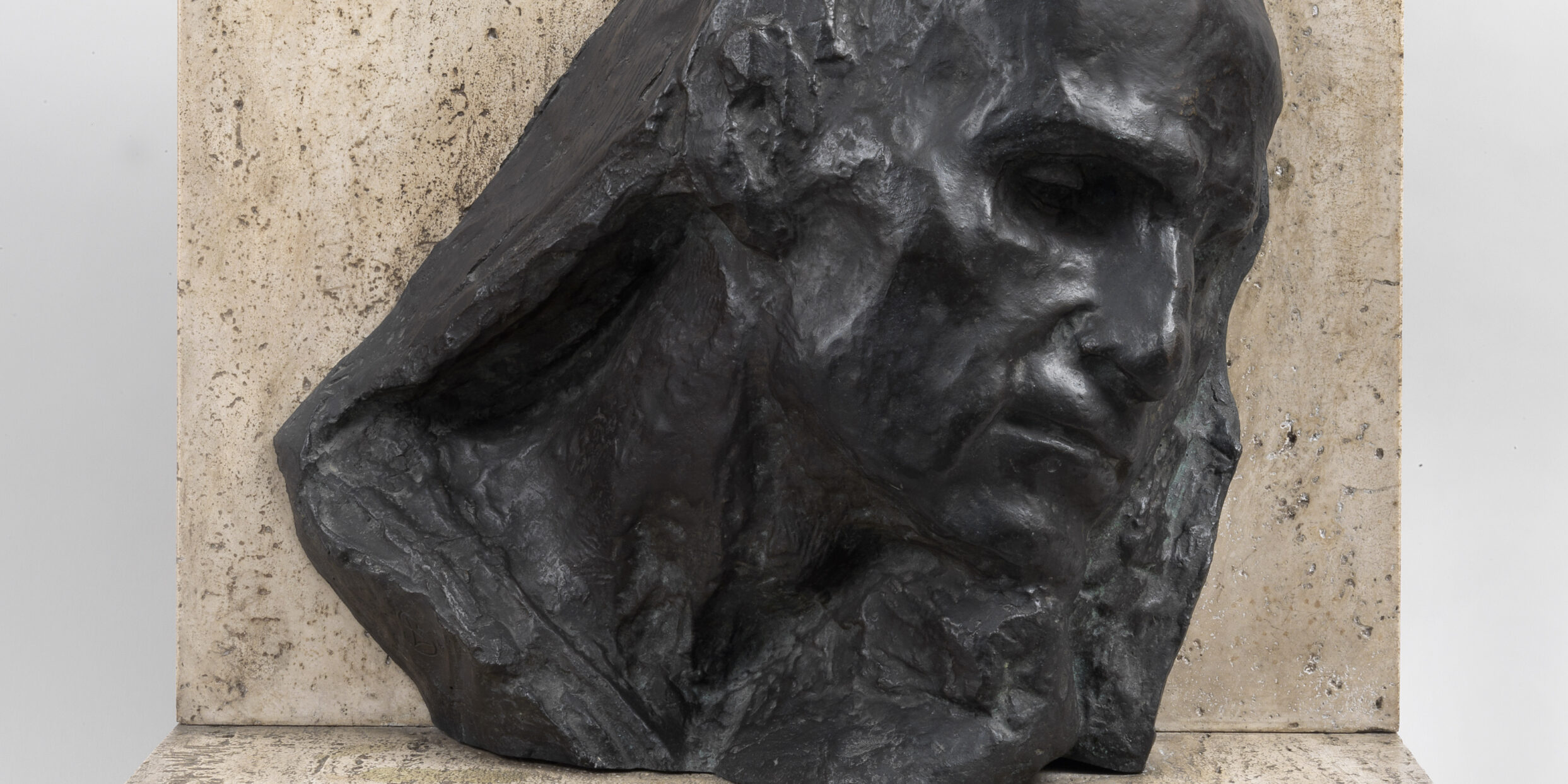 Head of a Philosopher

The bronze head is a detail of the figure of the Philosopher (or of Thought) belonging to the marble sculptural group for the funeral monument to Senator Tito Orsini who died in 1899.

Known as La Croce, the sepulchral monument was commissioned by his daughter, Countess Dattili della Torre-Orsini and inaugurated in the Monumental Cemetery of Staglieno in Genoa[1], on January 19, 1907.

The sculpture, already in place in 1901, had a certain resonance when the plaster model was exhibited at the sculptor’s personal exhibition at the Venice Biennale in 1905[2], obtaining almost unanimous critical consensus.

It is a complex allegory[3] consisting of eleven high relief figures that form a narrative unicum positioned between the high base and the large cross at the top.

From the left the Philosopher (or the Thought) next to the Filial Love, composed of a mother crying on the breast of her child, following the Youth that throws flowers on Childhood represented by two putti who look bewildered at the Pain, bowed with the face between the hands. More to the right, Maternity and, in the background, Faith with his gaze turned towards the cross; finally, as to close the composition, the Work with the spade and the gaze into the distance.

These are years in which a new and civil conception of death is gaining ground, in which the theme of lamentation acquires a collective dimension and pain leads to a more general reflection on death. The figure of the deceased disappears and the relatives are replaced, more and more frequently, by allegorical images of mourners. And Bistolfi had always claimed, albeit in the context of a symbolist aesthetic, the importance of the social function of art.

Precisely in the years in which he created the Orsini Monument, the passage from a style close to the soft sinuosity of Art Nouveau, to a production characterized by a more robust and vigorous plastic in which, in particular in male bodies, is evident the suggestion of neo-Renaissance and Michelangelo trends as well as the echo of the works by Rodin, whose fame is consolidated in Italy after his participation in the fourth Venice Biennale in 1901, where a personal room is dedicated to him.

From the study of the sketches and notebooks as well as of some writings it emerges that the artist’s creative process included only few steps: once the sketch was conceived in small dimensions, in which the initial idea took shape by becoming plastic, the sculptor moved directly to realize the plaster models in definitive size.

Two interesting sketches of the funerary monument for Tito Orsini are preserved at the Gipsoteca Leonardo Bistolfi: one, in which the definitive compositional idea is very clear; the other, in which, with a soft and more rough modeling, takes shape the left group, composed of three figures including that of the Philosopher[4].

A plaster model is kept at the Galleria Civica d’Arte Moderna e Contemporanea of Turin[5], while a replica, also in plaster, is donated by the sculptor in 1905 to the Revoltella Museum in Trieste[6]. In 1915 Bistolfi donated a second marble monument to the Galleria Nazionale d’Arte Moderna of Rome, on deposit at the church of San Domenico in Alba since 1949[7].

The successful realization of the composition is also evident in the diffusion of some details, such as that of the Philosopher‘s head, which later became an autonomous iconographic motif[8]. A three-quarter male face, not idealized, with a downward gaze and the intensity of someone who is “vigilant and absorbed, mute and eloquent, in the guise of the things that the more are spoken of the more are hidden”[9].

[1] The tomb is located in the lower eastern portico, niche CXXI.

[3] The interpretation of the composition is due to Paolo De Gaufridy in Leonardo Bistolfi a Genova: La Croce in Il Caffaro, 20 dicembre 1906.

[8] A plaster, detail of the model of the Philosopher‘s head, is also in the Gipsoteca Bistolfi (inv. 7292). A marble was exhibited at the GAlleria Al Portale in Casale Monferrato in 1983; and another, mounted on a travertine base, is in a private collection in Turin.

For further information, to buy or sell works by Leonardo Bistolfi (1859-1933) or to request free estimates and evaluations