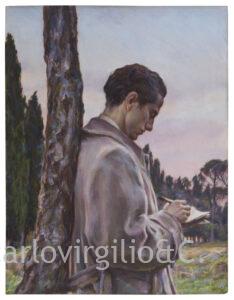 Signed bottom right: “ELICA BALLA”. Titled and dated on the back: “Inspiration / Spring 1941”

Like his sister Luce, Elica carried in her name the futurist blessing of their father Giacomo, who in 1914, the year of her birth, introduced the theme of the Caproni aeroplane into painting; to later sign the Futurist Manifesto of Aeropainting in 1929. She shared with her sister the choice of a secluded life and artistic collaboration with their father – of whom later she would write the biography (Con Balla, 3 vols., Milan 1984-86) – converting his ideas into objects of applied art and decorations for the Balla’s house in via Oslavia, a futurist setting in continual transformation. However, she showed greater determination than Luce to put herself forward as an autonomous artist. Futurist painter at a very young age she participated, under the pseudonym Ballelica, in the exhibition Trentatré artisti futuristi (33 Futurist Artists) at Galleria Pesaro in Milan in 1929, at the XVII Venice Biennale in 1930 and at the Prima mostra di Aeropittura (First Exhibition of Aeropainting) of 1931. In 1935 she exhibited with her father and sister at the Galleria d’Arte L’Antonina, while in 1942 she held a personal show at the Lyceum Romano (cfr. Casa Balla. Un pittore e le sue figlie tra futurismo e natura, catalogue of the exhibition at Comacchio, ed. by Maurizio Fagiolo Dell’Arco, Venice 1997).

As can be seen by many of the titles of her paintings presented on that occasion (Prelude of a Storm, Tranquil Sleep, Pensive Lionella, Smile of Spring and Melancholy), Elica focuses on natural reality and the inspirational motives of her figurative painting were sentimentally inspired. This lyrical concept is also evoked in the intimist portrait of a young man entitled Inspiration, where a young poet is intent on noting down ideas in a notebook at dusk, in a suggestive Roman park. The pinkish and pastel colours are applied with ease in an expressive style by means of the typical divisionist brushstrokes, in part recalling the late painting of her father Giacomo.

For further information, to buy or sell works by Balla Elica (1914-1995) or to request free estimates and evaluations