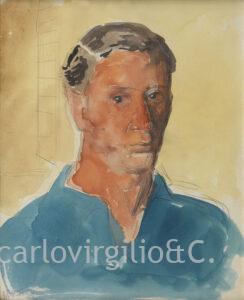 After the experience of Futurism, filtered through Cézanne and Cubism, he adheres to the general Return to Order of the early twenties, finding in it the cultural milieu and style that most suit him, so much so that he would remain true to it for the rest of his long career. Although already characterised by a thick, doughy brushstroke, with continuity and softness of line and a solid plastic understanding, it is a substantial transformation with respect to the theoretical acquisitions of Futurism. At this point he begins an incessant and programmatic return to classical and neoclassical sources. Moreover, for community of intent, in 1922 he is among the founder members of the Novecento group, alongside Lino Pesaro and Margherita Sarfatti. He hopes for a new Renaissance, rejecting any technique that does not adhere to the cannons of traditional painting and focussing attention on the plastic values of composition. In 1933 he signs the Manifesto del Muralismo with Campigli and Sironi and from that moment onward he dedicates the greater part of his energies to making large scale fresco cycles. At the end of his life he declared: “I have calculated that overall I have painted frescoes to cover an area at least 6 km long and 1 metre high.” Beside this enormous effort, easel painting is often thought of as a sort of fragment of the same, which might be the case for this self-portrait, that in its suspended fixity, inscrutable expression and in the distance of the research from mere psychological data, declares one of the essential references of his painting: Piero della Francesca.

For further information, to buy or sell works by Achille Funi (1890-1972) or to request free estimates and evaluations