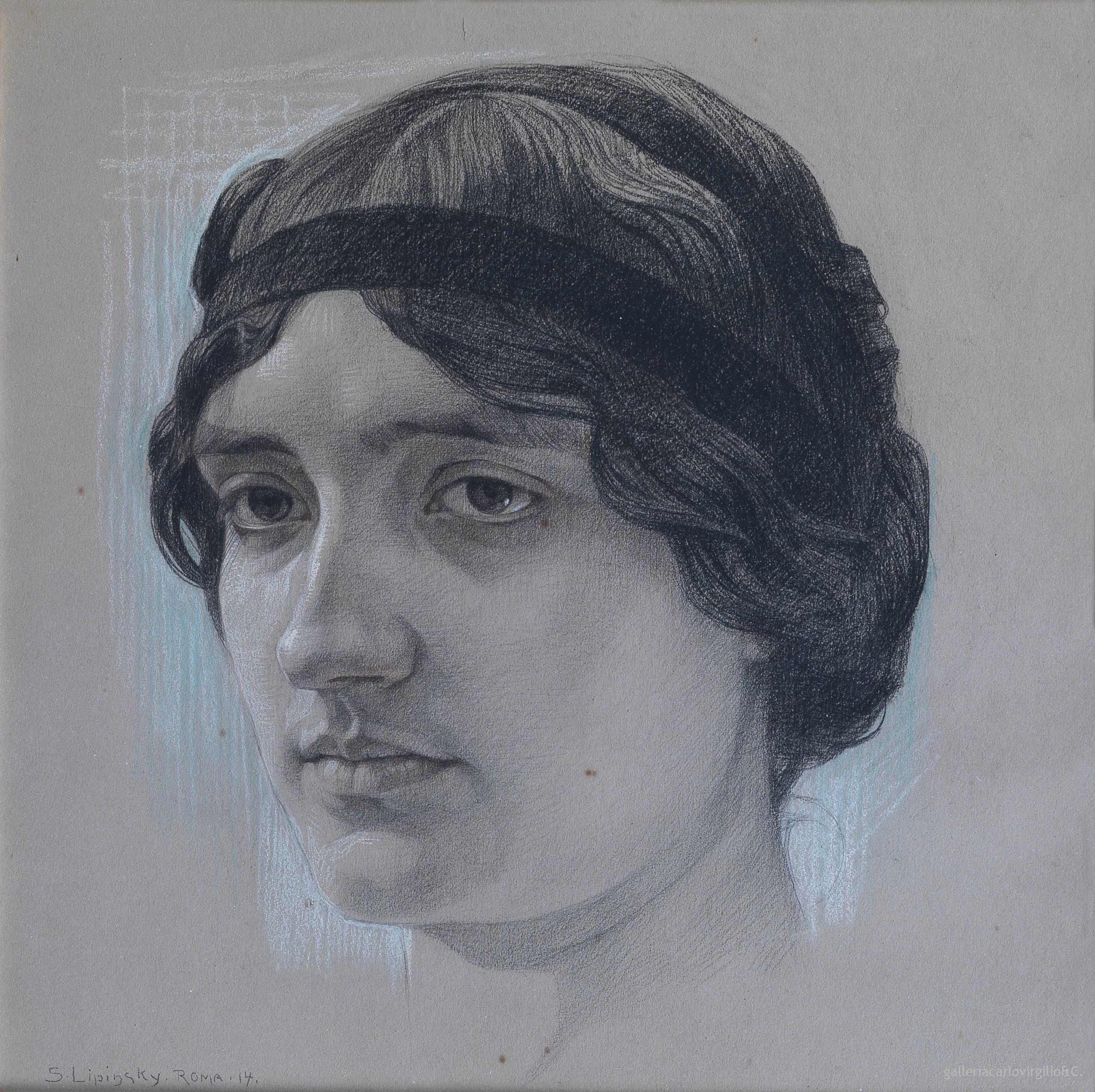 Noted above all for his production in drawing, Sigmund Lipinsky was one of the most influential foreign artists active in Rome in the early twentieth century (cfr. Bardazzi 2012). Born in 1873 in Prussia, today the Polish city of Grudziądz, he trained at the Academy of Arts in Berlin with Anton von Werner. He was awarded a scholarship that allowed him three years in Italy, and arriving in Rome in 1902, he settled there, taking one of the studios at Villa Strohl-Fern (De Feo, Raimondi 2012, pp. 88-90, 169). In the capital he found a large community of German artists – mainly the second generation of the so-called “Deutsch-Römer” – and established a deep artistic and personal friendship with Otto Greiner (Leipzig 1869 – Munich 1916). Critics have often underlined the influence of the Leipziger engraver on Lipinsky’s graphic production; evident in the analytical attention he pays to anatomical detail. And indeed Greiner’s technical expertise changed the way in which many artists conceived drawing in the early twentieth century (cfr. Parisi 2017, pp. 35-45; Carrera 2017, pp. 47-57) among others Umberto Boccioni, above all regarding the theme of the nude and more in general the representation of the human figure: if on the one side this was certainly also the case with Lipinsky, who would later go so far as to publish a manual of anatomy aimed at the artistic depiction of the human body (Lipinsky 1931), on the other hand it must be said that he intentionally renounced a certain coarseness in Greiner’s style to reach a more shapely and elegant figurative rendering, in line with the tendencies of a more bourgeois taste. «Greiner is uniquely an exquisite and powerful etcher, but Lipinsky is a colourist in black and white» (Howell 1924, p. 267) wrote Edna Howell in 1924, underlining the sensuality of his figuration.

More than in his symbolist production, expressed in complex engravings and inventive burin ex libris (for greater detail, see Bragaglia, Gai 1992), Lipinsky’s introspective vocation is fully revealed in portraiture. In the skilful combination of technical rigour and attention to the psychological state the Young Girl under consideration stands as a particularly apt example of Lipinsky’s manner of interpreting the portrait, a genre that he regularly took on throughout the course of his career, with paintings, drawings and engravings – among his most noted portraits are those of Caterina Lombardo, Claire Wenz, Raoul Heinrich Francé, Lucy von Waldthausen and Galeazzo von Thun und Hohenstein. Signed and dated 1914, the work is part of a series of portraits that the artist made around the middle of the century’s second decade in which he focused exclusively on the sitter’s head. A Head of a Young Girl was exhibited in Florence in 1914 at the “I Esposizione Internazionale di Bianco e Nero;” (Catalogo 1914, p. 51, n. 264) and a further two heads are known of, with the same model posing, both dated 1914. Already in 1913, at the first exhibition of the Roman “Secession,” among the four drawings put on show there was a Head of a Girl (Secessione 1913, p. 53, n. 72), belonging to the series of heads drawn before Lipinsky was obliged to return to Germany at the start of the First World War. His presence among the exhibitors of the “Secession” should be laid at the door of Roman artists – who by associating had in mind the model of the Middle European Secessions – to represent the international modernist trends. However, from the following year Lipinsky no longer took part in the “Secession” exhibitions, preferring to show his work at the old “Società Amatori e Cultori di Belle Arti,” respecting the choice of his friend Otto Greiner, who never took part in the Secession and was among the organizer of the exhibtions of the “Società Amatori e Cultori di Belle Arti” (for in depth ananlysis, see Kinzel 2017, pp. 23-34).

Independently of the change of politico-cultural alliance, by 1914 Lipinsky was fully part of the Roman panorama and had established himself as a point of reference, both for the German community (he was president of the Deutscher Künstlerverein), and for young Italian artists. Consequently, he opened a school of drawing and painting in his studio in via Margutta. When he resumed his activity after the pause imposed by the world war, he set up again, first on his own and then at the British Academy of Art, becoming for his pupils a personality of high standing in the history of art of the nineteen hundreds: to take one from among many, the painter Fausto Pirandello, who from the maestro changed the expressive force lent to drawing.

For further information, to buy or sell works by Lipinsky Sigmund (1873-1940) or to request free estimates and evaluations