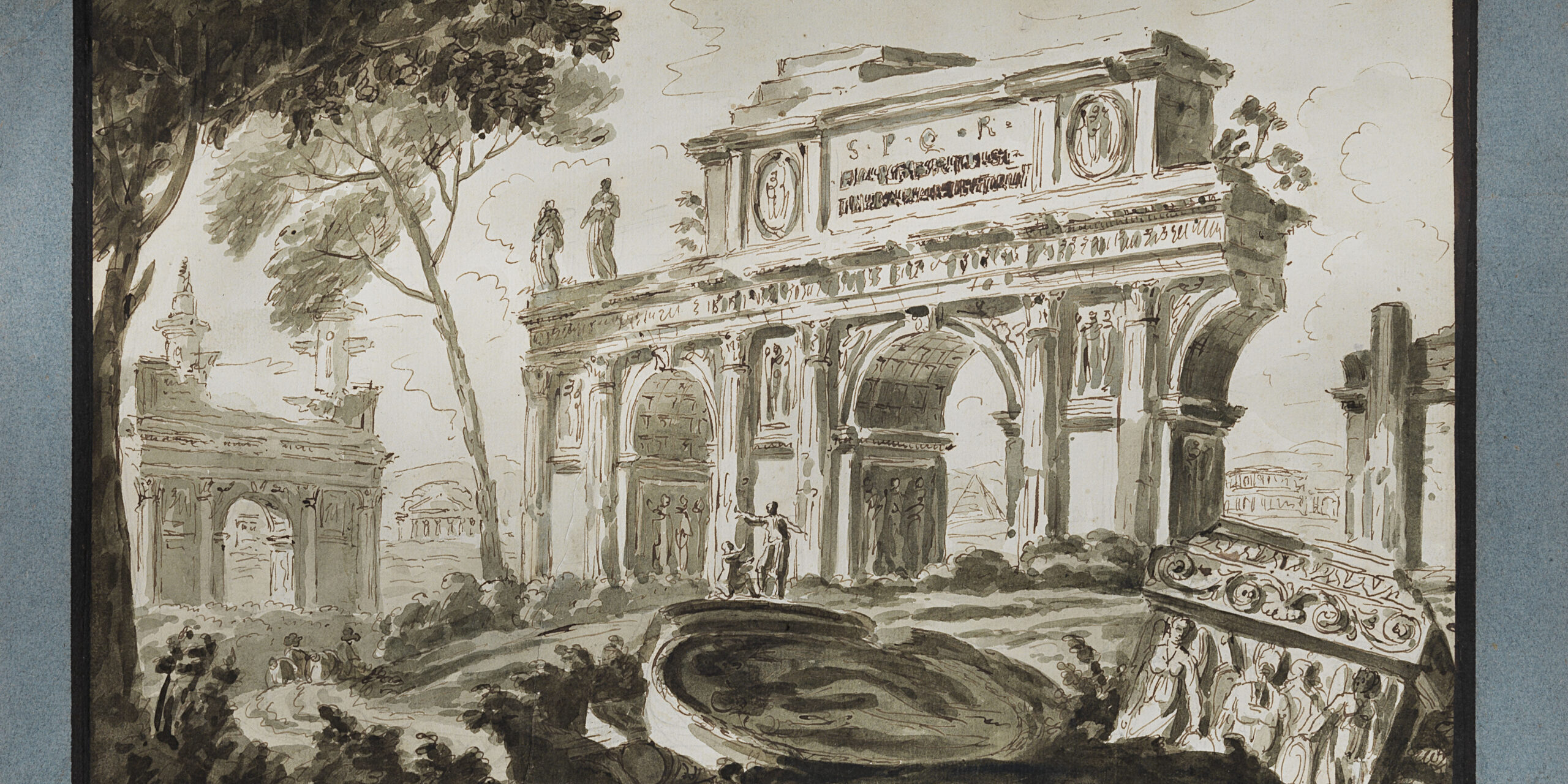 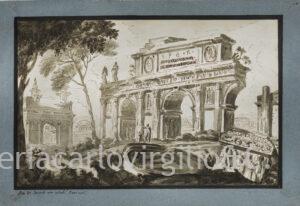 Prolific draftsman, Barberi has been defined “one of the most fertile architects of the Italian late eighteenth century” (Pace), not so much for the actual achievements, which were limited and largely unrecognizable today, but for the exceptional inventiveness entrusted to drawing in the countless ideal architectural projects, in capricci, in the studies of theatrical and furnishing sets, in caricatures.

After his rewarded debut at the Concorsi Clementini of 1762, as architect Barberi created in 1774 the catafalque for the funeral in honor of Louis XV, assisted by Vincenzo Pacetti for the sculpture and commissioned by his patron François-Joachim de Pierre de Bernis, ambassador of France. For the Altieri family he designed the urban reorganization of Oriolo Romano and the erection of the church of San Giorgio, while for their Roman palace he prepared, between 1787 and 1793 for the wedding of Paluzzo Altieri with Marianna of Saxony, the refined rearrangement of the famous neoclassical apartment, coordinating a team of artists that included among others Pacetti, Felice Giani, Antonio Cavallucci, Giuseppe Cades, Marcello Leopardi, Giovanni Campovecchio, Benigne Gagneraux, Jean-Pierre Saint’Ours, Wenzel Peter.

After joining Jacobinism and the Roman Republic, building the triumphal arch in Ponte Sant’Angelo for the celebration of the Federation, and having suffered an unjust imprisonment for embezzlement, only to be acquitted of the charges, he set out on the path of Parisian exile, however, losing the extraordinary graphic repertoire he had collected in forty-seven bound volumes, as he complained in a letter to Napoleon. However, many of his works survived and some volumes and loose drawings can be found today in Northern American museums such as the Cooper Hewitt Museum in New York or the Center Canadien d’Architecture in Montréal or in Roman ones, from the Museum of Rome to the Biblioteca di Archeologia e Storia dell’Arte of Palazzo Venezia. They document an incessant exercise on the different architectural typologies, including utopian ones, and on the different styles from classicism rich in learned references to antiquity, to the Borrominesque. These variants appear not to be an end in themselves but connected to Barberi’s teaching activity, both within the Academy of San Luca and in his own private academy, where probably trained some protagonists of the next generation and of the Accademia della Pace.

The two capricci, representing variations on the theme of classical monumental typologies, the pyramid for the Sepulchre of Ptolemy, and the triumphal arches, in a picturesque context of ruins, statues, sarcophagi, spiral and rostral columns, temples, reveal the figurative relationships of Barberi on the one hand with Carlo Marchionni drawings exuberance, on the other with Giambattista Piranesi grandiose perspective and chiaroscuro dramatic force.

For further information, to buy or sell works by Barberi Giuseppe (1746 - 1809) or to request free estimates and evaluations