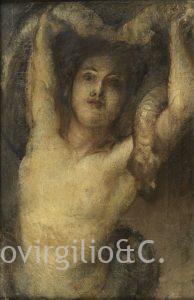 Initiated to the plastic neoclassicism of Luigi Sabatelli and aware of the developments of European painting, in particular in France – above all Millet and Courbet – and England – where George Frederic Watts is his main point of reference -, he develops his own particular variation of the romantic symbolist atmosphere, enveloping it in elements that are dark, softened and vaguely melancholy, drawing on the Nordic and Lombard tradition, and leaving it to resound with pagan echoes of luxury elegance and decadence, markedly evident in the voluptuousness of the female nudes. An anticipatory instance of German symbolism can also be seen here in Eve who, taking on the pain of humanity, tries to defend herself from the coils of a voluminous serpent.

For further information, to buy or sell works by Luigi Galli (1820-1900) or to request free estimates and evaluations