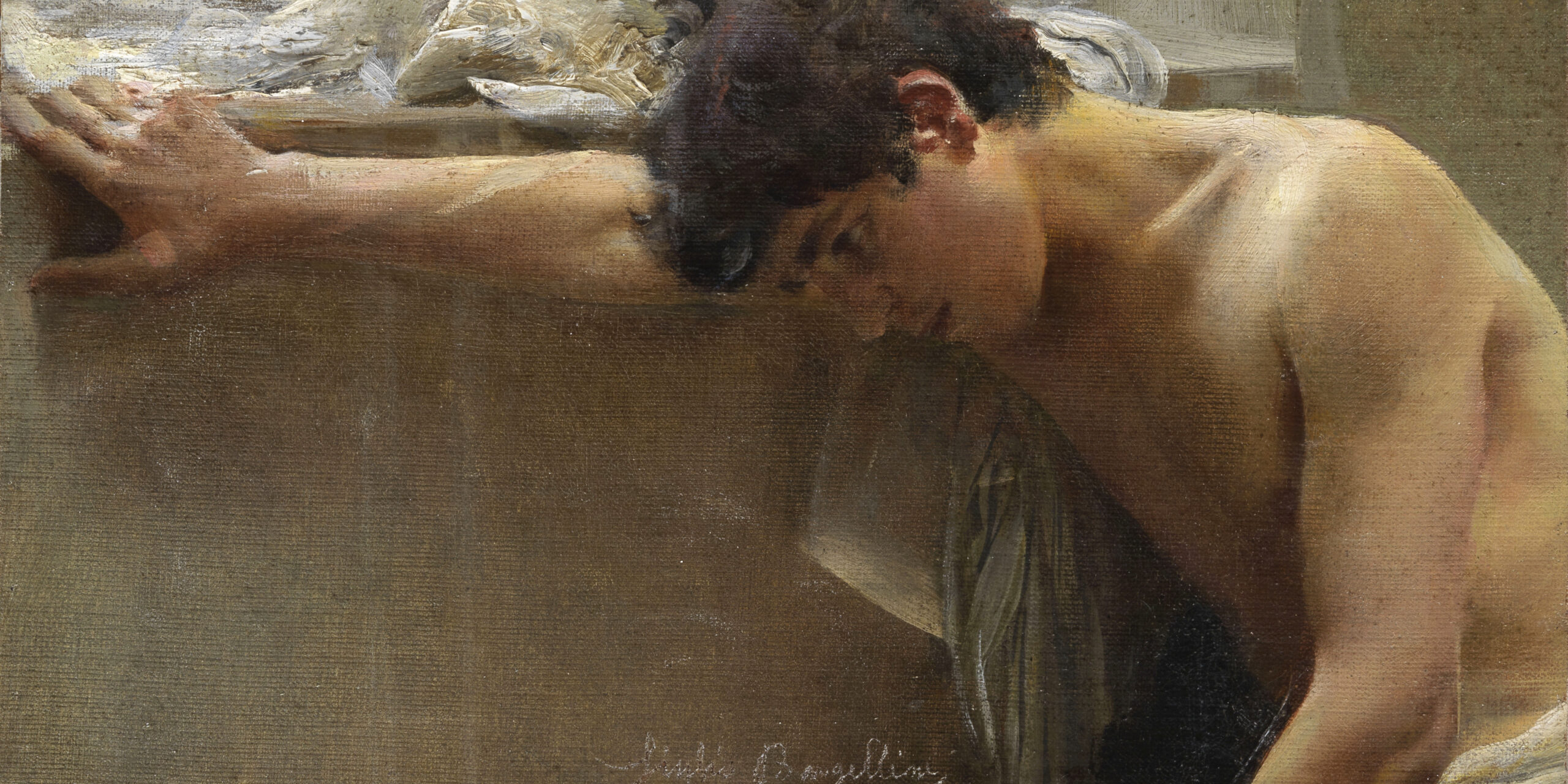 Bargellini would return repeatedly to the theme of the Idyll, first along the lines of Alma Tadema and then adhering to the iconic matrix of Gustav Klimt’s Jugendstil, probing the image’s potential to translate a state of mind. He would put forward several variations: in 1895 for Galleria Hauptmann of Florence, again in 1896 for the Esposizione fiorentina della esta dell’Arte e dei Fiori (Festa dell’Arte e dei Fiori. Catalogo della Esposizione di Belle Arti, Florence 1896, no. 213) and in 1897-99 (all canvases of unknown whereabouts). The theme returns, complicated by literary references, in the mural decoration of Villa Targioni in Calenzano (1906 – 1908). The study presented here, from the years 1897-99, is also part of a well-documented series of sketches, analogous in theme and compositional research, of which we know of a tempera and charcoal on canvas of circa 1892 and a pen sketch on which Bargellini notes in the right side margin “6 February 1895”, adding the comment: “commercial subject found non-commercial due to a lack of frills and ornament to divert the profane” (cit. in P. Spadini, Opere inedite, cit.). This hermetic and uncommercial character in the artist’s images, also evident in the Pygmalion with which he won the Pensionato artistico Nazionale in 1896, is already clear in the close-up, suspended objectivity of the figure depicted. The compositional instruments used by Bargellini in this canvas show a clear autobiographical desire, given that it is the painter himself wearing the clothes of the Idyll; the photograph used to monitor the ideation process, the correctness of the drawing and the experimental use of the medium (tempera and charcoal), are the manner in which the painter catches his own image asking the painting “that which the word and other arts could never do” (Bargellini in G. Bistolfi, “Il poeta dell’ombra dorata”, in Noi e il mondo, III, 1913, 1, p. 56). This fragment of a scene allows us to make out few elements of the surroundings and costume that in the finished painting are amplified in the Attic frame like that of Alma Tadema, a painter that Bargellini must have known through the Roman exhibition of 1883 and the review by D’Annunzio on Il Fanfulla della Domenica (1 April 1883), denouncing in his working method the training with Francesco Vinea in Florence, and above all later in Rome his relationship with Cesare Maccari and Francesco Paolo Michetti (G. Gentilini, “Attraverso lo specchio. Giulio Bargellini, la fotografia, il simbolismo”, in L’Artista, 1, 1989, pp. 154-67).