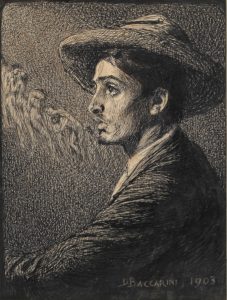 The uninterrupted series of self-portraits carried out by Domenico Baccarini constitutes a substantial visual diary of his brief life. A common thread firmly links private sphere with artistic research, the tension to know the spirit of the new human reality that was taking form at the beginning of the century, comprising the wish to extract the impulses and absolute feelings from within the self: “Baccarini is among the artists who, in the first decade of the XX century, manage to shift realism (human and social) towards a symbolist sensibility, without betraying it, achieving the miracle of an art that renders universal a human experience that is deeply rooted in a small corner of the world and of history, which is his place of origin (…) – writes Anna Maria Damigella (Damigella 2007, p.27) – Faenza was always the fixed point and the strong point, the place of return from an unrestricted life, in its brevity, marked by travel and long sojourns in Florence and Rome, by loved ones and the events of life, where he could put to the test the knowledge and conquests acquired elsewhere, evaluating and including them in the world that he feels to be his.” Drawing occupies the preeminent role in Baccarini’s articulated production, a medium of autonomous and versatile expression, apt for seeing to the depths of reality, beyond appearances, as happens to many other artists of the time: from the Divisionists to Alberto Martini, to the debuting Gino Severini (who would remember Baccarini for the beauty of his graphic works) and Mario Sironi.

In 1903, the year in which he made this self-portrait, Baccarini worked intensely at Faenza, after a stay in Florence, operating on that fragile confine between direct observation of reality and a symbolist language that obsessively rummages through the chaotic context of life. It is also the year in which he would fall in love with the strikingly beautiful country girl Elisabetta Santolini, who became his companion, inspirational muse, model and ideal model for the female figures that inhabit his sculptures and ceramics from this phase. In the plastic group Sensations of the Soul, soft and sinuous nude bodies abound, held in the virtual space of the sculpture, which, singularly or in groups, give shape to vases, cachepots and candleholders in Liberty style.

We find the same motif of the female nude in this self-portrait in pen, in which the twenty-one year-old Baccarini depicts himself in profile, immersed in a saturnine light. His moustache, short beard and hat with a large brim seem to be an attempt to disguise his youth, but with clumsy results. The hat is slightly tipped so as to leave his profile visible. The rapt and uneasy expression on his face betrays inner turmoil, even more obvious in other drawings from the same period, among which Frontal Self-Portrait, which focuses obsessively on the eyes. The garland of female nudes issuing from his semi-open mouth stands as a visible witness to the artist’s tormented state of mind. Alongside the skilful draftsmanship, with a telling knowledge of graphic technique, the compositional scheme is obtained by means of a game of triangles converging on the image of the artist.