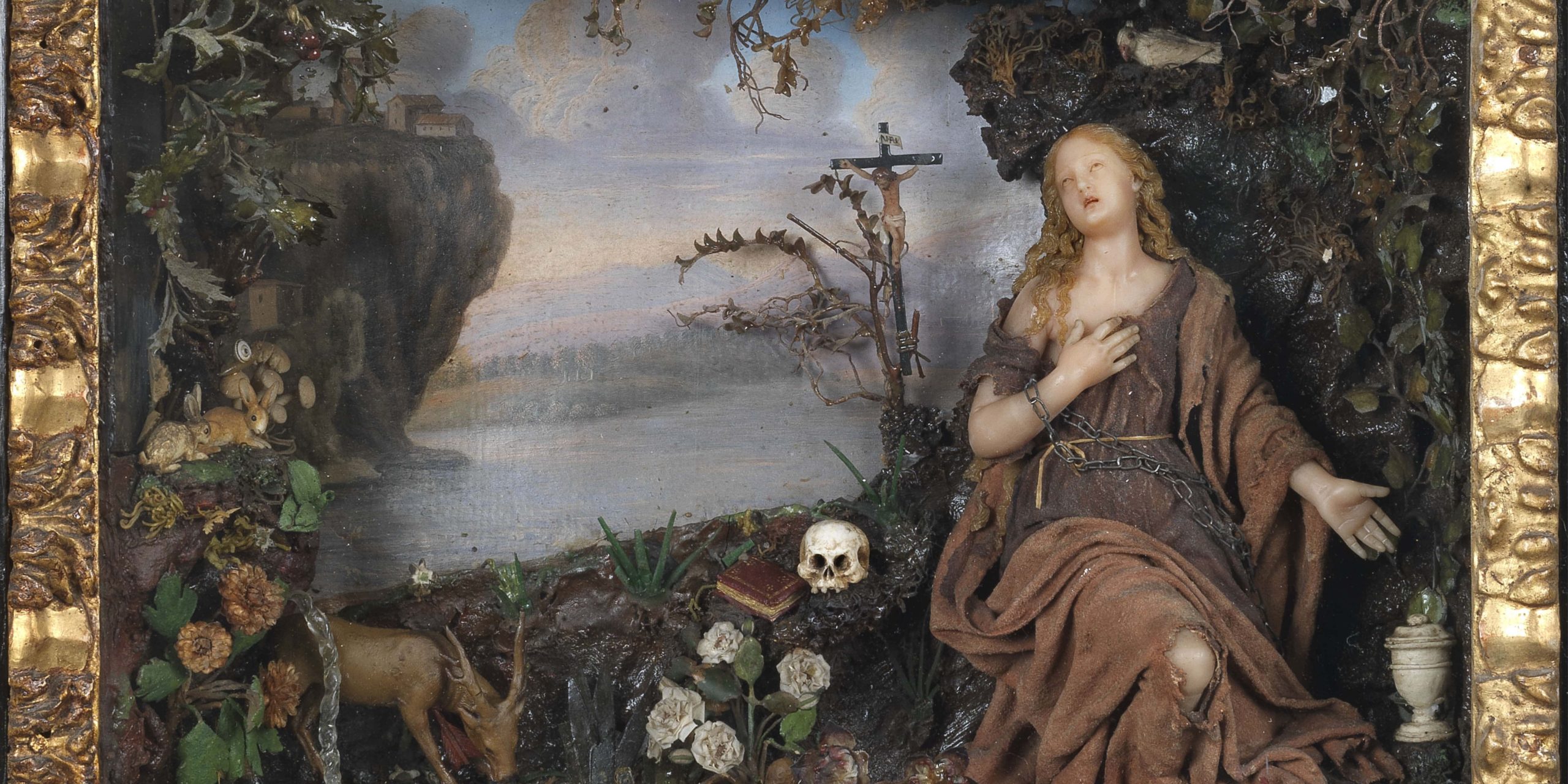 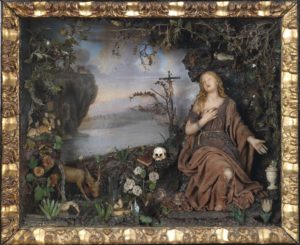 The Magdalene is kneeling in a crevice of the rock, raises her eyes to heaven and hold her right hand to her breast. In Christian art this represents the prototype of the penitent, of the repentant who withdraws to meditate and purify the spirit. In fact, she usually contemplates a crucifix, in this case bound to a shrub behind her, and is furnished with a balsamarium, in memory of the vial from which she poured the unguent to wash the feet of Christ, set on the right; a book and a skull, typical objects of meditation, visible lying on the ground to the left. De Julianis does not represent two other symbolic elements that sometimes accompany the Saint, that is the crown of thorns and the scourge which in this case is replaced by a chain, a penitential instrument with which it is rarely depicted. As for the iconography, it should be noted that this Magdalene does not follow the more usual canons of the Baroque period, when she was depicted half-naked, covered by long hair or in part by a mantle (Hall 1974, pp. 256–258). On the contrary, she shows the bare minimum, only the right arm with part of the shoulder and a point of the left knee, visible due to the ragged tunic and mantle. So, this is a much chaster image than usual, by the precise wish of the artist who, in yet another Magdalen (Cavallini Sgarbi collection), limited exposure to the arms alone. In both cases the reference model was not a Magdalene but a saint whose life had been much more restrained, i.e. St Rosalia. In fact, the wax figures take over in reverse and almost literally, except for the scarce nudity, in pose as in clothing, the St Rosalie in Glory, painted in 1624–1625 in Palermo by Anthony van Dyck, now in the Menil Collection in Houston, TX (Mendola 1999, p. 101, fig. 15; Salomon 2012, pp. 98–101, no. 14), known to Caterina from some print. The composition of the Cavallini Sgarbi Magdalene is much simpler and has a much smaller range of vegetation. In the wax model in question, however, there is a rich presence of plants and animals, deriving not only from an engaging narrative intent but, most likely, from an allegorical intention on the part of the artist. This is not the place to give such an interpretation, but some brief and partial indications can be attempted without proceeding to identify the individual plants and their associations. For example, we may see in the flowers the representation of the transience of beauty and appearance, in tune with the subject of the Magdalene whose redemption was achieved through penance and tenacious love of Christ, symbolized by the ivy, rooted in the rock of the cave, resulting in a spiritual purity, represented in the center in the bunch of white roses. The meanings that may be given to the animals is always connected to the leading figure, with the hares alluding to solitude and meekness, the snail to spiritual growth, the white cockatoo, perched among the rocks over the head of the penitent, perhaps to purity. As for the wounded deer drinking at the spring, it symbolizes the soul thirsty for God, according to a typical motif of mystic culture, also associated with St. John of the Cross and again with St Alfonso de’ Liguori. Thus, De Julianis proposed herself as delicate and precise narrator of small pictures of nature, strewn with Mediterranean flora intermingled with exotic plants, such as the many bulbaceous plants or tulips that we see around the Magdalene, in tone with the fashion of her time. Here, as in many other cases, for example the Adoration of the Shepherds and of the Magi in the Immacolata of Catanzaro, the floral elements, made of painted paper or silk, are usually represented with great descriptive ability. It is no accident that in her day the artist was much appreciated for her “beautiful, and very natural flowers made of silk, and that have scents according to their species” (De Dominici 1742–1743, vol. III, 1743, p. 621). And she won appreciation also as a painter of “landscapes with figures” (ibidem), which permits us to attribute to her many of the landscape backgrounds present in her waxes, often well integrated with the moulded elements; paintings not of the highest quality but scenographically effective, as we see in this Magdalene where not only the background, but also all the spurs of rock with greenery, placed to act as flat on the left side, are painted in tempera on paper. This technique is found not only in scenes with individual characters, see the San Christopher auctioned by Cambi (Milan, November 18, 2015, lot 4), but also in the more crowded ones, such as in cribs or representations of other sacred stories, while it is rarer in the celebrated representations of cemeteries, corpses and stripped bones on which is founded, I believe unjustly, the fame of De Julianis and which were in perfect harmony with the macabre taste of the late Baroque, of which the great Gaetano Zummo, who is said to have been her teacher, was an exponent. In all these works, various in taste and subject, De Julianis always shows remarkable skill in modelling, often a delicate charge of poetry, and the desire to give tactile value to elements such as drapery or branches, sometimes done by using real twigs and fabrics, and a naturalistic intensity to flowers and foliage, painted with extreme precision. In this wax the artist has sought not only a realistic effect in the garments, of real waxed cloth, or in the water, the spurt of which consists of a twisted glass rod but has also given the sensation of damp by passing a light brushstroke of varnish on the ivy growing in the antrum.