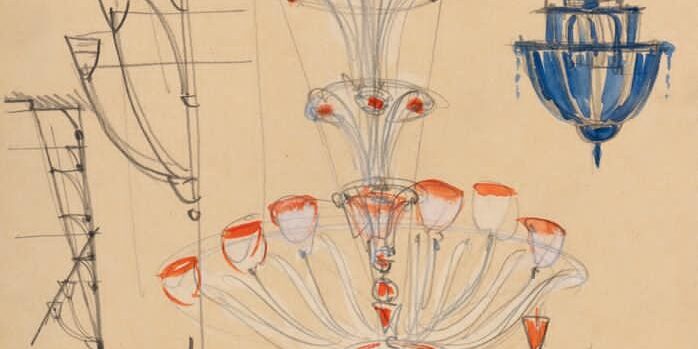 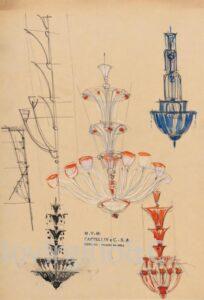 Carlo Scarpa’s collaboration with M.V.M. Cappellin began in 1926, even before he finished his studies and represents the first important episode in the Venetian architect’s career. In the glassmaker manufacture he approaches the work of Vittorio Zecchin (1878 – 1947), who had been its director just up to 1926, and by his works are inspired the Scarpa’s first projects, but highlighting greater cleanliness in lines and essentiality in forms. In the following years, and until 1932, when the M.V.M. Cappellin is forced to close due to financial problems, Scarpa’s work is characterized by an ever greater adherence to elementary geometric shapes and by the research into the color possibilities of glass, which becomes opaque and declined according to surprising colors.

The proximity to Zecchin’s models, from which, however, they differ due to the greater linear tension of the stems and the search for a more geometric ‘conclusion’ of shapes, allow us to date these sketches to the very early period of Scarpa activity at M.V.M. Cappellin.

For further information, to buy or sell works by Scarpa Carlo (1906 - 1978) or to request free estimates and evaluations