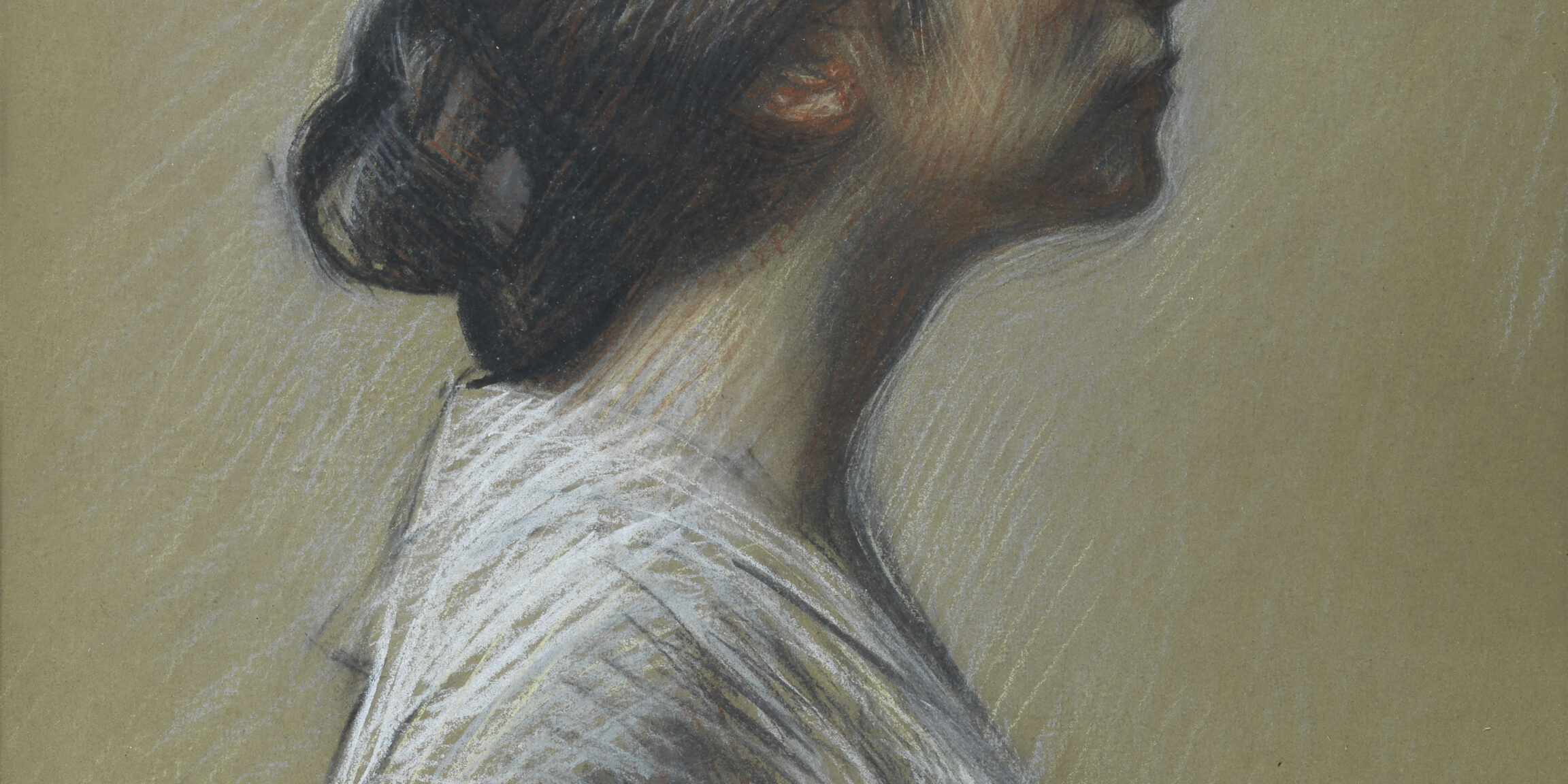 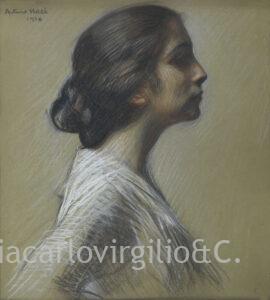 Note: a photograph of the work can be found at the photographic foundation Archivio Arturo Noci (Rome).

Arturo Noci is now recognised as a figure of great importance in the artistic panorama of Rome in the first two decades of the twentieth century. The critic Ugo Ojetti, in his review of the Fine Art Exhibition of Milan in 1906, where the artist presented the nude Riflessi d’oro (today in the Galleria Nazionale d’Arte Moderna collections), stated that Noci could by that time consider himself «the greatest, if not the only Roman portraitist.» (U. Ojetti, Attraverso l’Esposizione: pittori e pitture, in “Corriere della Sera”, 23 maggio 1906, p. 3). Particularly appreciated by the international aristocracy and the jet set of the time – his portrait of the diva of silent movies Lyda Borelli was famous (1914, private collection) – for his modern and elegant painting, Arturo Noci had a thriving career as a portraitist that culminated in him moving to New York in 1923, where for thirty years he could count on the commissions of wealthy collectors from high society.

Although the artist carried out important portraits on commission from the very start of his career (for example the pastel Portrait or Portrait in Yellow, received to acclaim at the Venice Biennale in 1905), unanimous written opinion associates the success of Noci the portraitist to the experience of the Roman “Secession.” When the disagreements in the “Società degli Amatori e Cultori di Belle Arti” led to a certain artists re-grouping to show autonomously in large international exhibitions, thus giving life to the “Secession,” Arturo Noci was in the front line and on the board of directors from the start. Without a doubt the initiative was fuelled by a desire to update the artistic milieu of the capital, by then considered excessively provincial. However, Noci’s search for modernity was somewhat moderate and, as was the case for many of his Secessionist colleagues, it found fulfilment in the haven of the divisionist technique, at that time back in favour among Roman painters. The divided touch was therefore used for the most part in the representation of interior scenes of an intimist flavour and in elegant portraits. Belonging to this phase is the expressive Girl in Profile: not a commissioned portrait, but an inspired figure study of one of his favourite models, painted at Noci’s studio in via Margutta. The work is part of a rich series of portraits of women carried out in pastel, all characterised by a rapid and impressive rendering in which completed areas alternate with swiftly sketched areas, and by a filamentary style that seems to echo the divisionist paintings of the same period. In 1916, the year in which Noci produced this pastel, the fourth Roman “Secession” exhibition was held; it would also be the last, due to the outbreak of war. However, the hiatus of the Great War did not damage the Noci’s artistic activity: on the contrary, he took to experimenting with more audacious visual formulae, stimulated by a re-found creativity. These are the years in which the painter gives attentive consideration to the developments of international art, in particular German, which he actualises in a greater attention to drawing and fulfilled artistic maturity.

For further information, to buy or sell works by Arturo Noci (1874-1953) or to request free estimates and evaluations