Teodoro Matteini – Portrait of a Young Woman with a Medallion 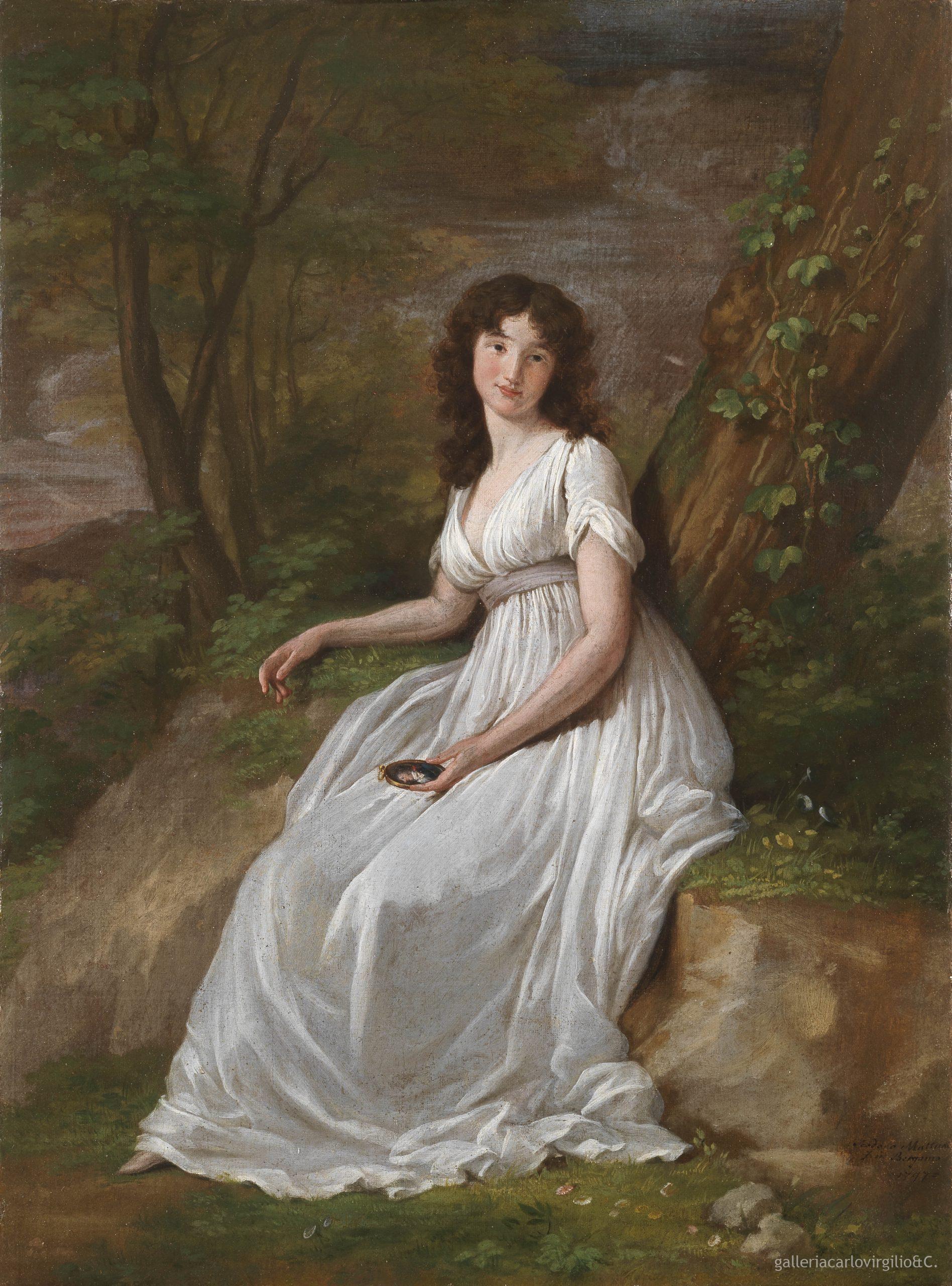 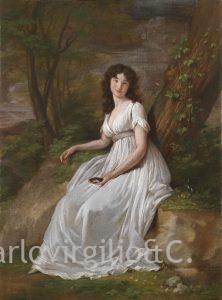 Portrait of a Young Woman with a Medallion

In the shade of a woody scene, that opens out in the distance on a mountainous horizon lit by the rosy light of evening, a young girl in a white dress with a high waist sits on a grassy knoll, in a melancholic attitude, with her head tenderly inclined and a sweet, thoughtful expression on her face. Leaning against the trunk wrapped around in strands of ivy, symbol of devotion and eternal passion, in her left hand she is holding a medallion with the profile in miniature of her distant loved one, identified with certainty, thanks to particulars of the uniform – the blue cloth and high red collar – as belonging to a French officer in Napoleon’s army at the time of his first dazzling campaign in Italy.

The painting’s inscription, clearly hand-written by the artist on the rock at the bottom right, relates that the work was executed by Teodoro Matteini from Pistoia, in the fateful year of 1797, in Bergamo, where on 13 March the local revolutionaries, with the backing of the French, brought to an end the centuries-long dominion by the Republic of Venice on their city and territory.

A charming canvas of extremely high pictorial quality and sophisticated tones, subtly playing with the range of browns, greens and greys, in perfect balance with the maiden’s skin colour and the whiteness of her full dress, as she sits in the foreground, central to the composition; it is one of the best examples of portraiture by Matteini. Alongside more traditional half bust portraits, depicted life size with a cohesive background, skilfully rendering naturalism and the psychology of the sitter, he had great success with these attractive full figure portraits in small format, generally set in the open, portrayed with a strong sentimental tone and in an anglicizing taste, comparable with coeval productions in portraiture by Giovanni Battista Dell’Era, Jacques-Henri Sablet and Louis Gauffier, which he began to paint towards the end of his twenty-five-year stay in the Eternal City, begun in 1770.

Having left Rome in 1794 to go to Florence and then on to Milan (1795-1796) and Bergamo, where he stayed until June 1796 and January-February of 1798, by March of that year Matteini was settled in Venice, where he would remain – after a few months in Padua, between the summer of 1799 and January 1800 – taking on, in 1807, the prestigious chair of painting at the re-founded Academy of Fine Arts, where he would be the appreciated maestro of an entire generation of painters; just to mention a few, Odorico Politi, Giovanni Demin and Francesco Hayez – who remembers him in his memoirs with affection and admiration (Mazzocca 1995, p. 40), – Ludovico Lipparini, Michelangelo Grigoletti, Placido Fabris and Cosroe Dusi (see Pavanello 2002, pp. 13-94, in particular pp. 13-21).

The painting, that reached us through heredity from lawyer Davide Cugini, famous twentieth century legal expert from Bergamo, noted patron of the arts, art historian, and collector of antique and contemporary art, was passed on during the nineteen nineties to the city’s antique market (Galleria Michelangelo – Galleria d’Arte Due Bi), and thence to that of Milan (Carlo Orsi) (Gazzetta 1997, p. [7], colour ill), where it was bought in 1997 by the Bolognese collector and art historian Eugenio Busmanti, who died prematurely in November 2018.

For further information, to buy or sell works by Matteini Teodoro (1754-1831) or to request free estimates and evaluations