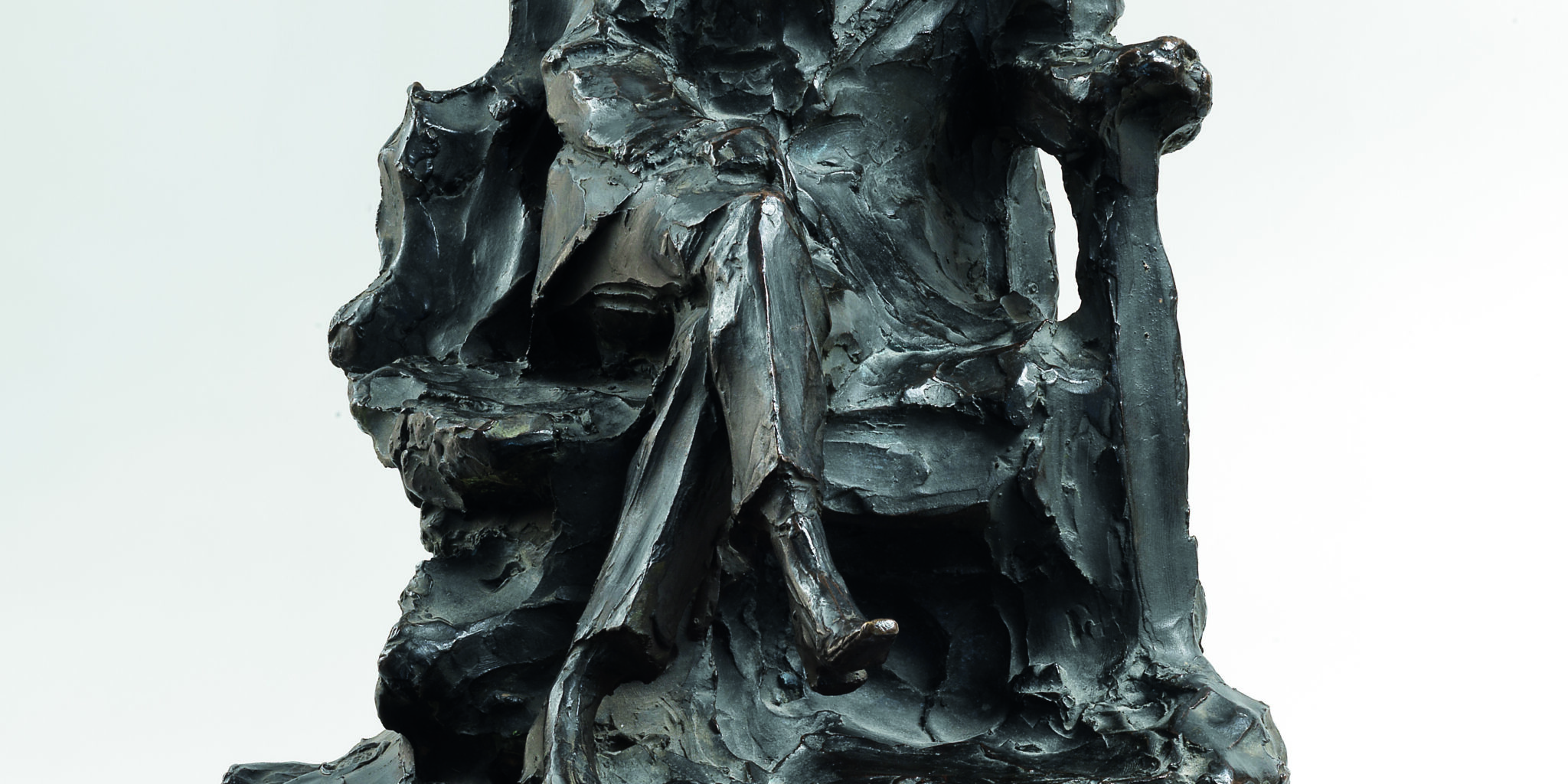 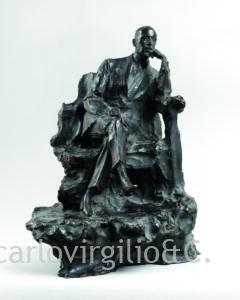 The long-lasting friendship between D’Annunzio and Troubetzkoy, witnessed by their meetings, correspondence and a poetical dedication from D’Annunzio to the sculptor, was punctuated by two portraits.

The already established writer was depicted in the youthful bust in Naples in 1892, when Troubetzkoy was entering the competition for the monument to Garibaldi. D’Annunzio praised his sketch in the “Mattino” as “the best of all” those put forward, due to the converging of “purposes” and the mastery of “features,” with nothing ornamental, in the sublime hero’s head, through the simplicity of the pyramidal shape. (D’Annunzio 2003). The portrait was carried out in the open air “on a terrace in Mergellina” for the Contessa Marine de Béarn (Gardone Riviera, Fondazione “Il Vittoriale degli Italiani”, cfr. Paola Pizzamano, in Gli scultori di D’Annunzio 2015, pp. 200-203). In its rapid and rugged modelling, the work fully interpreted the capture of light and spatial ephemera demonstrated by the Lombard Scapigliatura, based on the formal reflection not only of Troubetzkoy, but also Medardo Rosso.

The depiction of the poet seated in full figure was carried out later in Paris, where both writer and sculptor had moved and where, in 1911, D’Annunzio put on his play Le Martyre de Saint Sébastien, set to the music of Claude Debussy, with stage design by Léon Bakst and Ida Rubistein as protagonist, at which we know Troubetzkoy made an appearance from one of his letters conserved in the poet’s archive.

It was in that year that D’Annunzio posed for his friend in the famous studio at Neuilly-sur-Seine, where Troubetzkoy, by now prince and sculptor of great fame, from Russia to the Americas, received cosmopolitan high society. This time the sculptor underlined the poet’s elegance and meditative attitude. And in the reduced format of the portrait, the sketch-like style of the Scapigliatura, he referenced the results of international impressionism and dialogued with the essential paradigm of Rodin, as the figure emerges from the phenomenal shapelessness of the setting.

D’Annunzio modelled then, as a “caricature sitting in an armchair” – according to the term in the artistic tradition used by the sculptor’s son Luigi (Troubetzkoy s.d., p. 27) – was comparable to the virtuosic and worldly force of Boldini’s portraits. A visitor of the Secessione romana of 1913 could read this attitude of elegance with subtlety: “the full body statuette in bronze, today exhibited in Rome, is an elegant work in which the man of the world is portrayed with grace rather than as the indefatigable ‘worker of words’ (“L’Illustrazione Italiana”, n. 16, aprile 1913, p. 386).

The original plaster model of this portrait is conserved at the Gipsoteca Troubetzkoy at the Museo del Paesaggio di Verbania Pallanza (cfr. Piergiovanni Castagnoli, in Paolo Troubetzkoy 1988, pp. 102-105; Stefania Frezzotti, in Paolo Troubetzkoy 1990, cat. 154, p. 199; Anne Pingeot, in Italie 1880-1910 2000, cat. 39, p. 154). In 1952 a bronze version of the work, belonging to the surveyor Gagliardi, was exhibited at Pallanza. Since that date, the version shown here is the first to be revealed to experts, fused in lost wax by the famous Parisian foundry of Claude Valsuani. We do not know if the artist originally made more bronze copies or just this one. In any case, the work found immediate and substantial success, being exhibited in the bronze version in Buffalo in 1911, in Toledo, Ohio and at the Salon de Paris the following year, at the Permanente in Milan and the Secessione romana in 1813, and again, among numerous other occasions, at the Venice Biennale of 1922.

For further information, to buy or sell works by Troubetzkoy Paolo (1866-1938) or to request free estimates and evaluations