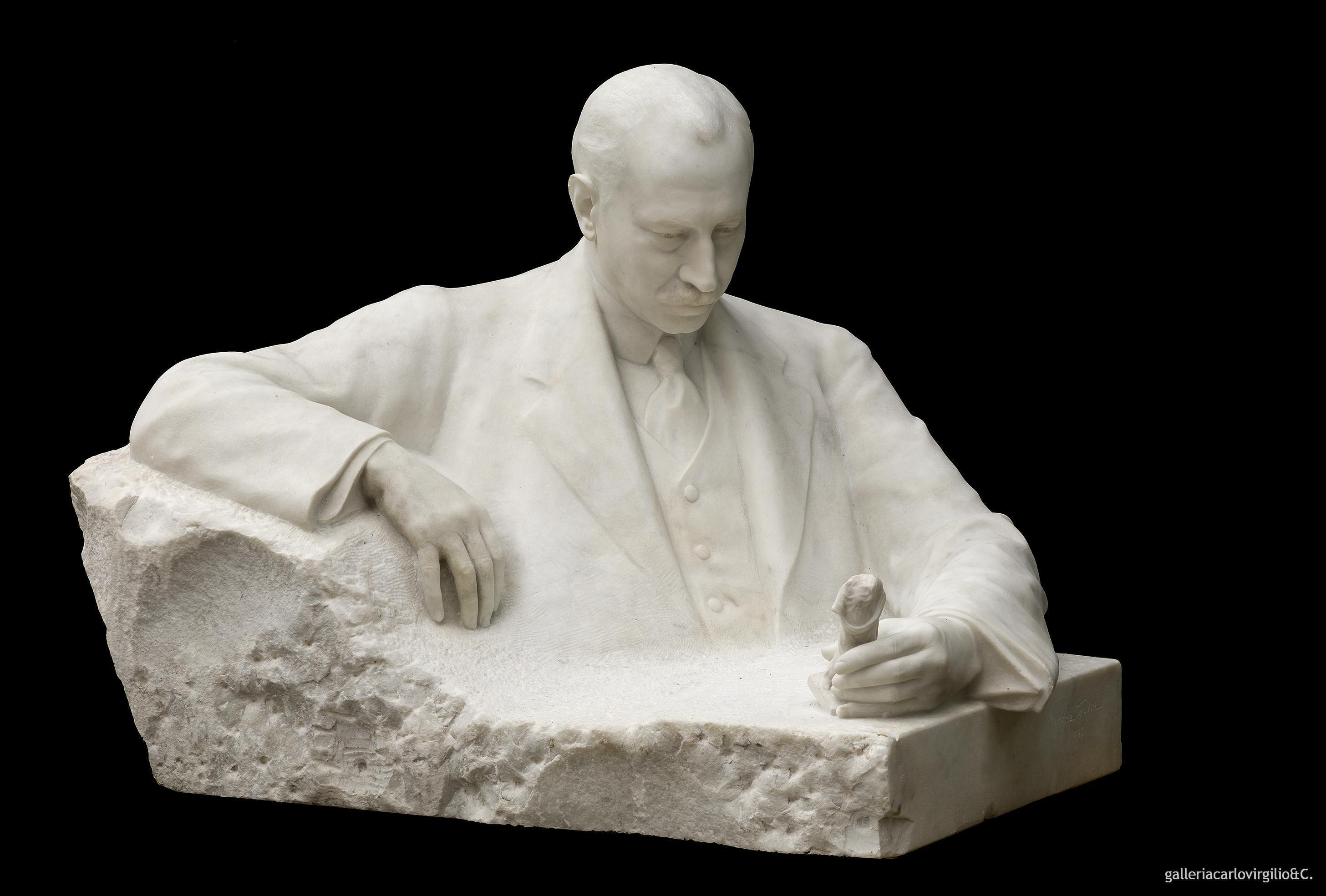 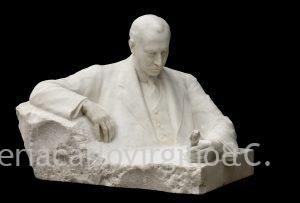 Signed and dated lower right on the base: “MAURICE FAVRE 1918”

Recently reappeared on the antiquarian market, this unpublished post-mortem bust depicts the eccentric German businessman Heinrich Schliemann (Neubukow 1822 – Naples 1890). As a small merchant, he quickly managed to build an economic empire trading gold and indigo, which he sold to the Russian army during the Crimean War to dye uniforms. Economic ease would allow Schliemann to devote himself to his great passions: travel, languages ​​and above all the classical culture he studied for a year at the Sorbonne in 1866. After a first trip to Greece in 1868, he decided to retire from business to devote his time fully to a search of the places described in the Homeric texts, of which he was a great connoisseur. Despite his status of self-taught archaeologist, often contested by the scientific world, Schliemann would be at the origin of a series of exceptional archaeological discoveries, in particular the ancient cities of Troy (1870), whose walls were identified on the hill of Hissarlik in Turkey, Mycenae (1876), Orcomene (1880) and Tiryns (1884).

he bust presented here, signed and dated on the base, is the work of the French sculptor and medallist Maurice Constant Favre (Saint Maurice 1875 – Paris 1919). Active in Paris at the turn of the twentieth century, the artist trained at the Academy of Fine Arts in Paris under Ernest Barrias, Pierre Jules Cavalier and Félix Coutan, whose teaching was accompanied by the less institutional sort found at the Académie Julien, one of the most famous “free” academies in Paris. In 1896, in his early twenties, Favre exhibited for the first time at the Salon des Artistes Français (SAF) where he presented the Bust of Mademoiselle Louise Tresal, a marble medallion that received an honorable mention. Taking advantage of the recognition, he exhibited again in 1898, presenting the Portrait of Colonel Turnèse, and in 1899, presenting the Bust of Madame de B., receiving a certain public success for both. These were the precursors to a long series of marble portraits – a genre in which he would specialize in part thanks to frequenting important Parisian salons and a certain worldly milieu – executed in the first decades of the 20th century. There was no lack of prestigious commissions such as that of Baron Edmond de Rothschild, for whom in 1907 he created the statue entitled Regret (plaster, signed work, H 1.55m, Paris, Petit Palais), depicting the poet Alexandre Ducros. The work, which received the silver medal at the Salon of the same year, would have the honour of being presented at the Royal Academy in London the following year. It was on that occasion that it came to the attention of King Edward VII (1901-1910) and Queen Alexandra, whom he portrayed in 1909 in a gilt bronze group.

Between 1909 and 1918 Favre carried out a series of official commissions for commemorative portraits of important French public figures: politicians (Camille Pelletan; Frédéric Passy, ​​Nobel Peace Prize, 1913; and Gustave Mesureur, first president of the radical party, 1913); military heroes of the First World War (General Bailloud, 1912; generals Mallterre, 1917; Maunoury, 1917, Museo d’Orléans; and Niox, 1917); and intellectuals. It is probably in one of the most well known Parisian salons of the time, that of Madame de Arman de Caillavet, that the meeting with the famous writer Anatole France took place, of whom he would create one of his most renowned portraits in 1918.

It is in this context that the portrait of Heinrich Schliemann must be seen. In fact, although documentary proof is unavailable as yet, it is legitimate to imagine the work resulting from an official commission (for example from the French Archaeological Institute of Athens?). Executed twenty-eight years after Schliemann’s death, the portrait could only be commemorative and probably based on photographic material. Following the example of previous works (Bust of Frédéric Passy, ​​Bust of Anatole France), Favre abandons the traditional format of the hermed bust traditionally associated with Schliemannian iconography according to the model chosen by the German sculptor Richard Grüttner in the portrait executed in the years 1860-1870 ca.

In this work, the French artist opts for a more modern horizontal format, in which Schliemann, in contemporary clothes, contemplates a headless antique statuette with satisfaction, an evident reference to his archaeological successes. The choice of a more contemporary representation is also found in the monument made in 1895 in Schwerin, in Schliemann’s region of origin, by the German sculptor Hugo Berwald-Schwerin and in the bust preserved in the National Archaeological Museum of Athens.

The portrait by Favre is of strong Rodinian inspiration, found above all in the use of the non finito which gives the impression of the bust emerging from the marble block. This composition, much imitated in the first two decades of the 20th century, had been codified by Rodin from the end of the 1890s, thanks to a series of famous worldly and commemorative busts (see the Bust of Malher, 1895). The fragmentary, almost archaeological, character assumed in this way ends up becoming the subject’s own attribute, together with the statuette in his hands.

Created in 1918, a year before Favre’s death, the work is probably one of the artist’s final creations.

For further information, to buy or sell works by Favre Maurice Constant (1875-1919) or to request free estimates and evaluations