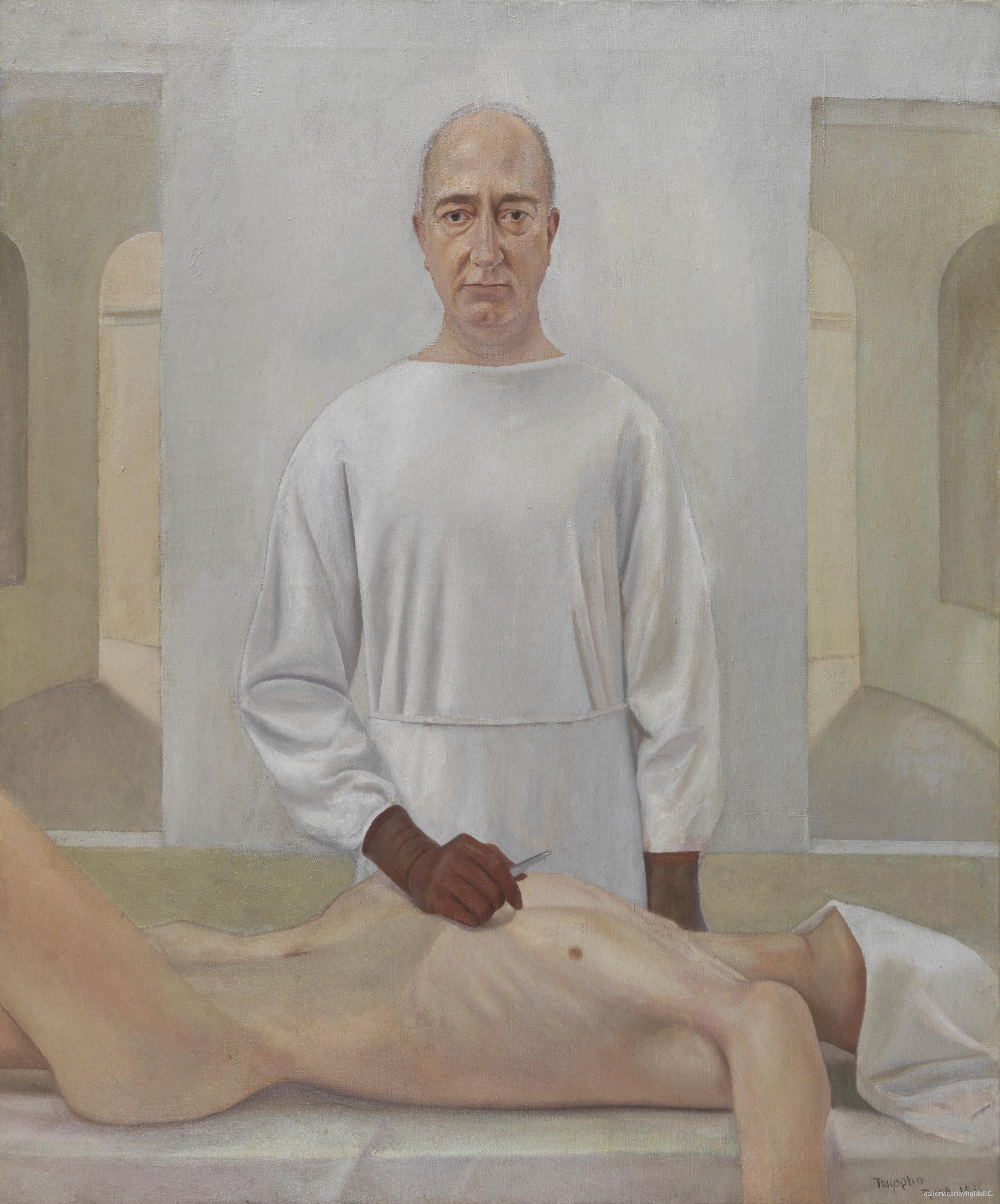 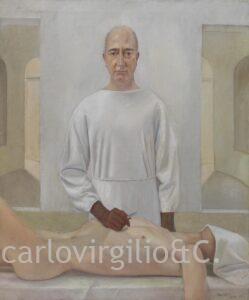 Portrait of the Surgeon Gino Pieri

Interpreter of the return to order and magical realism, Trifoglio first showed his work in 1910 at exhibitions held by the Società Amatori e Cultori di Roma, demonstrating suggestions of De Chirico’s metaphysics. Post war, he exhibited at the first Roman Biennale in 1921 and, thanks to taking up plasticity in form again, in compositions that Ettore Camesasca would later recognise the stamp of a “synthesis of Piero della Francesca,” he participated in the first exhibition of the Novecento Italiano in 1926, appreciated by the curator Margherita Sarfatti, followed in 1927 by the show Dieci Artisti del Novecento Italiano and the following year by the Venice Biennale. Among the protagonists of  “magical” abstraction, he was then compared to Cavalli and Capogrossi in 1933 at the Circolo delle Arti e Lettere in Via Margutta.

Trifoglio’s introverted and melancholic character, added to the fact that he contracted tubercolosis, which would cause his early death in 1939, kept Trifoglio apart from public artistic debate. A rare artist and known for a small number of works, his sophisticated and severe painting left us with the Self-Portrait in Black at the Galleria Nazionale d’Arte Moderna and some still lifes where he placed Giacomo Leopardi’s funerary mask as the interpretative key of his inner vision and philosophy.

In 1940, Giuseppe Pensabene held his posthumous personal show at the IX Mostra del Sindacato Laziale. But already, back in 1933, in Emporium (pp. 370-372), he supplied a key to reading his painting. “In the final Roman exhibitions, the works of Luigi Trifoglio attracted great interest; an artist who has worked alone for years, in conscientious research, going deeply, on his own account, into the problems of modern painting!” In his paintings Pensabene saw Trifoglio summarise and go beyond the research of the European avant-garde, as a representation of “objects in the concreteness of their matter: objects given a reality that was considerably more intense than the real and whose spirituality manifests itself (in a very modern sense) as the height of objectification.” Hence art was not seen as “liberation of matter, but as the extreme realisation of the matter itself: transfusion and identification of the id in things.”

The portrait of the surgeon Gino Pieri is one of the artist’s most representative works. The frontal, symmetrical composition, the plasticity obtained, as Virgilio Guzzi (Pittura alla II Quadriennale, in Nuova Antologia, 1 marzo 1935, p. 101) said “by direct intuition of the volumes and abstracting from the game of shadows,” the dry, very clear and luminous colours that are redolent of mural painting, and the mysterious perspectives opening out in the background point to quattrocento figurative sources, from Masaccio to Piero della Francesca. The hieratic appearance of the surgeon, the profound fixity of his gaze, the gravity of the expression matching that of his profession, revealed by the body lying in the foreground like an aulic lay deposition, truly seem to be invested in their abstract materiality with the artist’s existential vision. The universal pain of the human condition is evoked without violating the formal serenity of the scene.

The protagonist, Gino Pieri (Anagni 1881-Rome 1952) was an eminent physician in Udine for many years. Under surveillance by OVRA (the secret police) due to his socialist political positions, he was nonetheless requested by Mussolini to come to Rome and carry out a secret operation. Linked to partisan groups in Friuli he was arrested by the Gestapo and then freed to deal with the return of the Germans on the National Liberation Committee. In 1946 he was elected deputy for the Socialist Party and was a member of the Constituent Assembly of Italy.

For further information, to buy or sell works by Luigi Trifoglio (1888-1939) or to request free estimates and evaluations