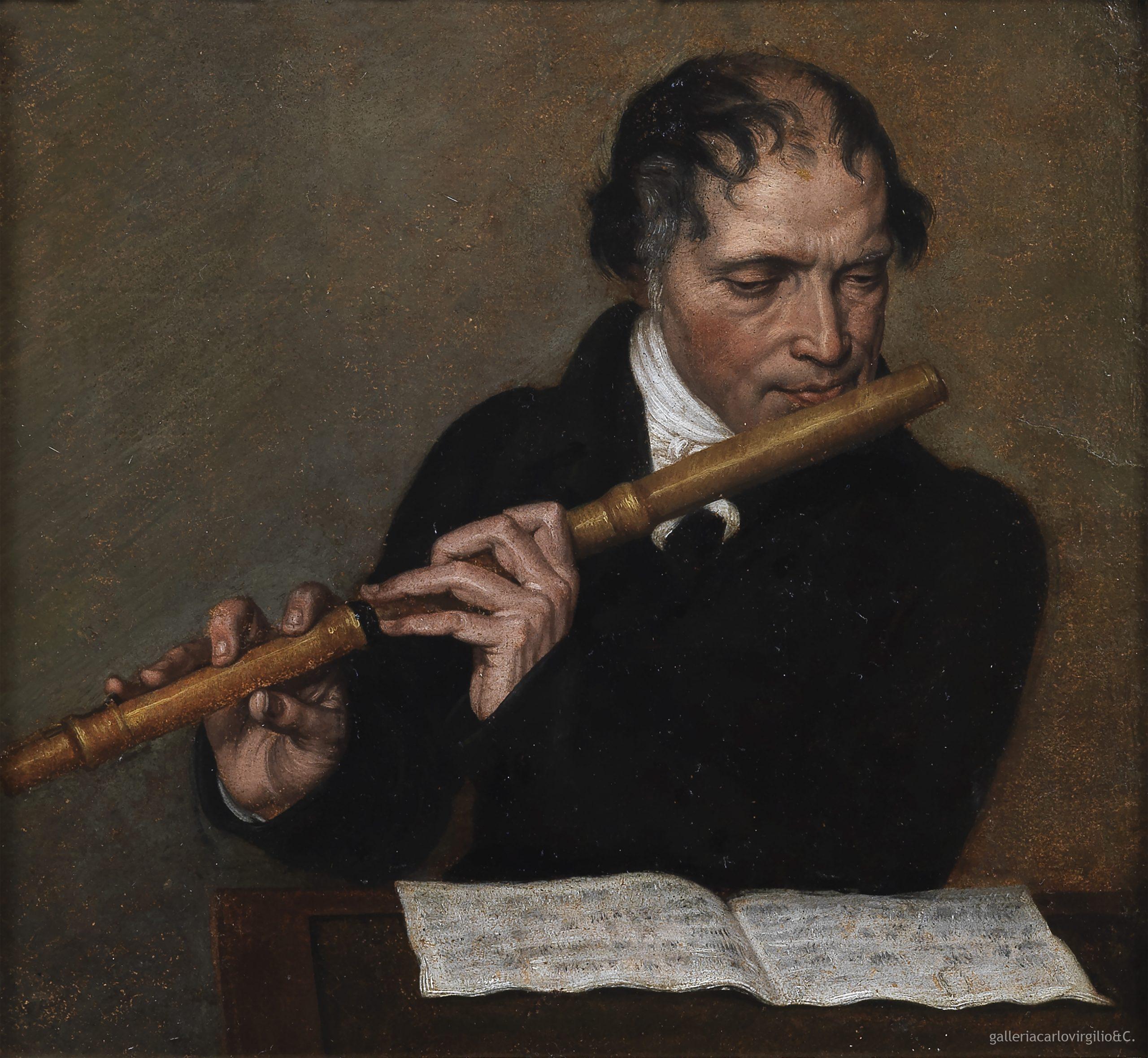 Portrait of a Flute Player

Inscriptions: on the frame, in pencil, “Cutolo”

The subject, portrayed three-quarters while playing the flute, is seen in an enclosed space with a grey background that is dark but easily made out – articulated by the table on which the score lies open, prominent in the foreground – with the figure’s mass obliquely submerging into the wall behind, balanced by the opposite line of the flute. The man is dressed in a coat of black cloth with a slightly raised collar and a white necktie, knotted in the front.

We do not know who the flautist was, nor have we been able to identify him in the portraits of various maestri of the early nineteenth century. Equally, nor does the name “Cutolo”, written on the frame, shed light in this respect; however, since it dates back to the nineteen hundreds, it seems that it might refer to one of the painting’s owners, perhaps the noted professor Alessandro Cutolo (1899-1995) who had a small art collection and lived in Naples, the city from which the painting originates and where the surname is common.

A first non-stylistic observation enables us to date the work to not beyond the first two decades of the nineteenth century, years indicated for the cut of the garment and the type of necktie, already in fashion in the late seventeen hundreds, as well as the model of flute, probably made in boxwood, with four pieces and only one key, on which the flautist is placing the little finger of his right hand. These typologies would soon be outdated: that of the instrument, already developed in the eighteenth century, would undergo substantial changes from the start of the nineteenth, such as the addition of other keys. Hence, the flute depicted appears to be an old model and the polished sockets where the various joints meet indicates that it is of Italian make. Indeed this characteristic is typical of Italian flutes from the seventeen hundreds onwards and is rarely found, and if so much less accentuated, in French instruments (Gatti 1997, pp. 270-280).

The stylistic elements help us to date the work and reach a sustainable attribution. The painting is an expression of the culture that developed from David onwards, spread by his followers, often in the wake of the Napoleonic successes. I believe that it originated in a Neapolitan milieu where various French painters worked for the court, among others Jean-Baptiste Wicar who, summoned by Joseph Bonaparte in 1806, reformed the statutes and teaching of the pre-existent Accademia Borbonica, which re-opened in 1809. His pupil and, at least once his collaborator, was the Gaetano Forte who inherited his draftsman’s rigour and the ability to analyse people introspectively and in physical reality (Saccone 1980, p. 197; Martorelli 2010, p. 236). These characteristics, proper to Forte’s portraiture, appear in our flute player, from the intensely depicted face – for instance the thinning hair with locks falling forward, referred to as à coup de vent – and the concentrated expression he is adopting as he plays a musical piece that is not identifiable because the notes are illegible, that were indeed perhaps never made out with precision. A close parallel can be drawn with the Portrait of Domenico Chelli (Naples, Museo di San Martino), datable to 1813, where Forte catches a passing expression with intensity and forms the strong hands with touches and markings in whites and browns, with similar results to those seen in the flautist. The two paintings strike me as close in time too, dating to Forte’s early activity, when he was still attentive to suggestions from Maestro Wicar.

The small size of the work is unusual for the artist, and the medium, oil on paper, is more frequently used by landscape painters.

For further information, to buy or sell works by Forte Gaetano (1790-1871) or to request free estimates and evaluations