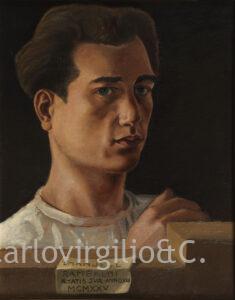 Painter, illustrator, engraver, ceramicist and designer, almost entirely self taught and of precocious talent, he represents one of the most original and lyrically intense voices of Ligurian painting of the 1920s.

Rambaldi began painting towards the end of the 1910s, stimulated by his friendship with Achille Funi, Leonardo Dudreville and Alberto Salietti, who spent long periods at Chiavari, Rambaldi’s home.  In his early compositions, whose main reference is futurism with a plastic presence, where the pictorial sign of divisionist descent, here breaking down into full-bodied neo pointillist touches, there distending into more serene and silent chromatic linearity of fauve influence, show him to be a sensitive observer of the new issues that ran through Italian and European pictorial culture.

The result of this research, alongside his fellow adventurers, is the plastic synthesis of Novecento. For Rambaldi, the language most congenial to him, of classical descent and luminist clarity playing itself out in the faint Mediterranean light of the Ligurian Riviera, partly diffusing the aspiration to monumentality in rarefied and silent atmospheres of lyrical metaphysical dreaming. If there are strong echoes of the magical realism expressed by Felice Casorati in the still lifes of 1924 and 1925, in this composed and intense Self-Portrait Rambaldi knowingly reconnects with the fifteenth century tradition, framing himself by a shelf with a noticeable Latin scroll. The archaism is in homage to the age-old metier of the artist, a topos strongly felt in those years of the ritorno all’ordine, and perhaps, among the many, it holds a reminder of the Self-Portrait with epigraph by De Chirico from 1920, although here the synthetically and geometrically configured plastic modelling is different. Standing out, in the abstract fixity of the expression, in the clearly defined volumes and in the peaceful management of the luminist contrasts, is the focusing of the observation on intimate tones of the soul, devoid, however, of a psychologism of individualistic stamp, a cipher that traverses and characterises his entire artistic production.

1925 is also the year of Rambaldi’s public recognition. He receives the praise of the sculptor Arturo Martini and founds, with the critic Attilio Podestà, the ‘Gruppo d’Azione d’Arte’ raising, initially in Liguria, the issues of Novecento promoted by Margherita Sarfatti. The ‘Gruppo’ is joined by the ‘Bottega’ of which Rambaldi is artistic director and designer and whose creations are shown at exhibitions in Italy and abroad. From this moment he is present at the most important Italian shows, from the Venice Biennale, where in 1940 he has a solo exhibition, the Quadriennali di Roma and the Esposizioni di Brera as well as the national union exhibitions; and then through these, the principal international festivals held in Europe and the United States. Worth mentioning too is his appearance at the second exhibition of the Italian Novecento, held in Milan in 1929.