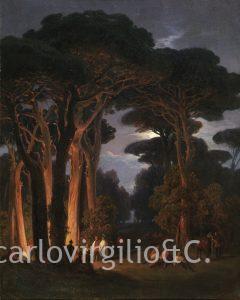 Garibaldi camped with soldiers of the Italian Legion at Villa Doria Pamphilj, perhaps after the retreat of the French forces under General Oudinot on the night of 30 April 1849

In this extremely rare figurative testimony of the Siege of Rome, Garibaldi and the Italian Legion, just back from South America, where it had adopted its characteristic red jacket, are seen camped at Villa Doria Pamphilj during the defence of the Republic of Rome of 1849 from the French besiegers. The episode might refer to the night of 30 April, the day on which Garibaldi, his soldiers and the Battaglione Universitario Romano forced the retreat of their besiegers. Castelli, Republican soldier and painter who left a visual reportage of the Siege of Rome, the defence and bombing of ’49, in the series of drawings at the Museo Centrale del Risorgimento, was later a political exile, besides being a recognised protagonist of landscape painting in Rome around the middle of the century.

For further information, to buy or sell works by Castelli Alessandro (1809-1902) or to request free estimates and evaluations