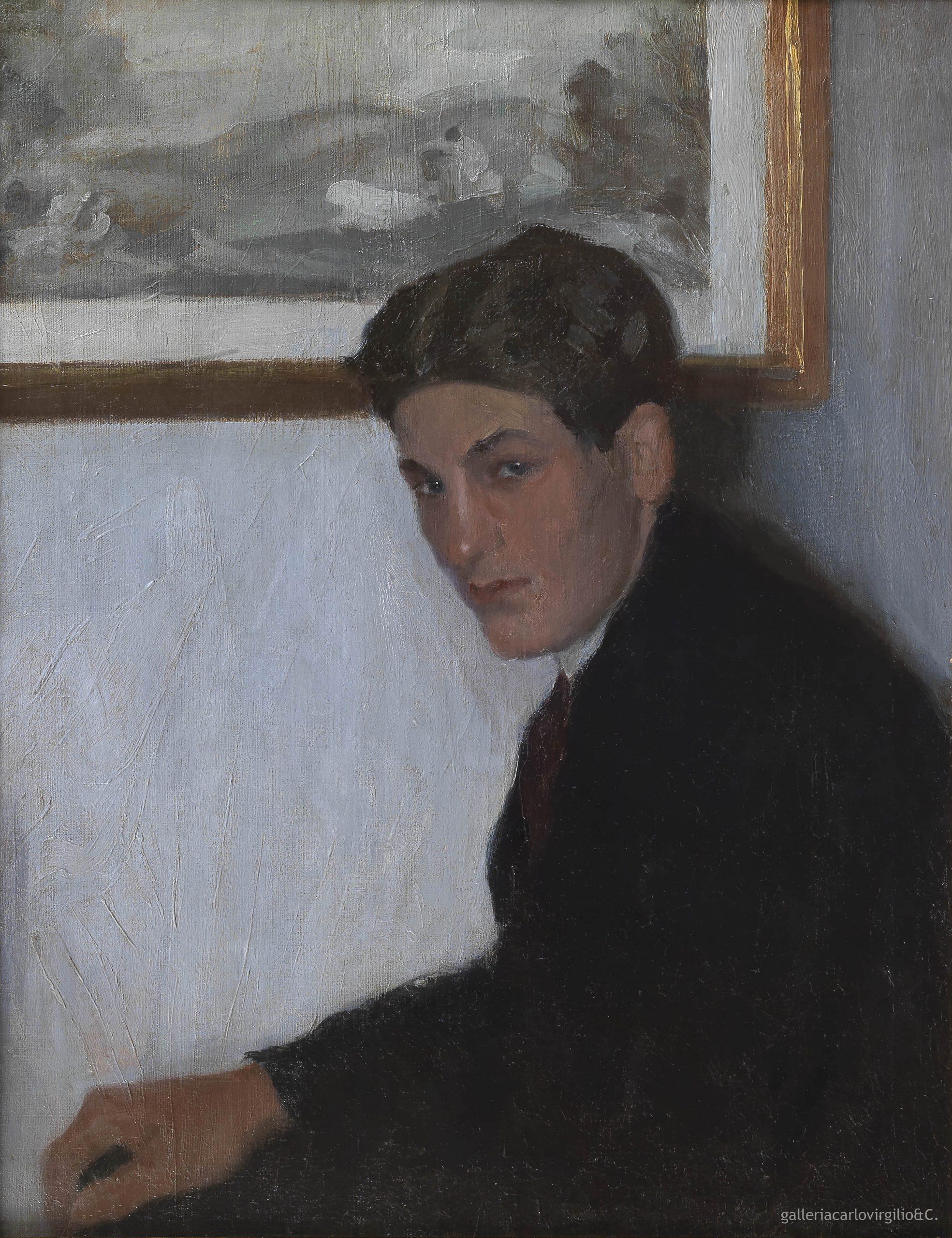 (“O.F.B.F / summer 1912”, “exhibited in Venice at Cà Pesaro”, “painted by Adolfo Callegari portrait of Sig. Tasinato Gino at the time”)

This work is a rare painting by Adolfo Callegari from Padua, who presented it in 1913 at the exhibition of the young avant-garde of Ca’ Pesaro in Venice, and probably never since. The sitter is one of the brothers from the Tasinato family, farmers in the countryside between Padua and the Euganean Hills, neighbours to Callegari. The picture is a sharp analysis of reality entrusted to few elements. In the foreground a young man dressed in dark clothing, his face turned towards the painter, with a mordant, impenetrable look, accentuated by his blue eyes, slender closed lips and the pronounced nose that reinforces the man’s psychological expression. Positioned to the right of the pictorial area and in profile, the mass of the body sits confined in a small space between the light-coloured wall and the fleeting diaphragm that separates the painted space from real space. On the wall, summarily drawn and almost monochrome, the painting within a painting seems to offer an illusion of depth. The Portrait of Signor Tasinato is the ‘existential’ representation, through the allegory of a rarefied intimacy, of a silent place where time seems to pass so slowly that it gives the impression of being immobile.
In the summer of 1912, when he painted this likeness, the thirty-year-old Callegari had begun to revolutionise his life following the death of his father, who had always supported and guided him. He imposed the sun to enrol in Jurisprudence, up to graduating in 1906 (the same year Felice Casorati graduated), but then he allowed him to take the longed-for artistic path, seeking for him artistic milieu with moderate positions, driven by solid moral principles. He studied between Padua and Venice, then, like his friend Bortolo Sacchi, he completed his training at the Munich Academy, where he focussed on the practice of drawing and copies of the masterpieces in museums; all the while frequenting exhibitions put on by contemporary artists.

Callegari spent the winter of 1912 secluded in the Paduan countryside at San Pietro Viminario, with the only aunt left in the family. He began to show his work. His painting displays a pondered observation of the research of youthful art in the exhibitions at Ca’ Pesaro in Venice and the Roman Secession, in which he participated.

The following year he exhibited the Portrait of Signor Tasinato at Ca’ Pesaro as well as two other oils and three watercolours, and was noted by the critics for the high poetry of his interiors. Callegari aimed to depict domestic compositions, in serene chromatic harmony, that could emotionally move the viewer. Many artists took part in the show with whom he had been in touch during his time at the Academy or at least whose artistic development he had followed: Felice Casorati, author of a large solo show, Gino Cadorin, Umberto Moggioli, Mario Cavaglieri, Gino Rossi, Tullio Garbari, Ubaldo Oppi, and the sculptor Arturo Martini, all using freer expressive languages. For various reasons, Callegari came to the decision to step down from the stage of exhibiting. Despite briefly participating in the Great War, he nonetheless continued to exhibit until 1922, from which moment he would mainly paint for pleasure. Around 1914 he bought a sixteenth century villa in the medieval borgo of Arquà, where Petrarch spent the last years of his life. Callegari kept up good relations with various friends from Ca’ Pesaro, frequented Conte Cini’s intellectual circle, cultivated a close relationship with Ugo Ojetti and his review “Dedalo”. He became an inspector of the Soprintendenza, mayor of Arquà and custodian of the house of Petrarch, he would also be director of the archaeological museum of the small town of Este until just before his death (1948), having become an archaeologist and authoritative expert on Este and the Euganean area.

For further information, to buy or sell works by Callegari Adolfo (1882-1948) or to request free estimates and evaluations