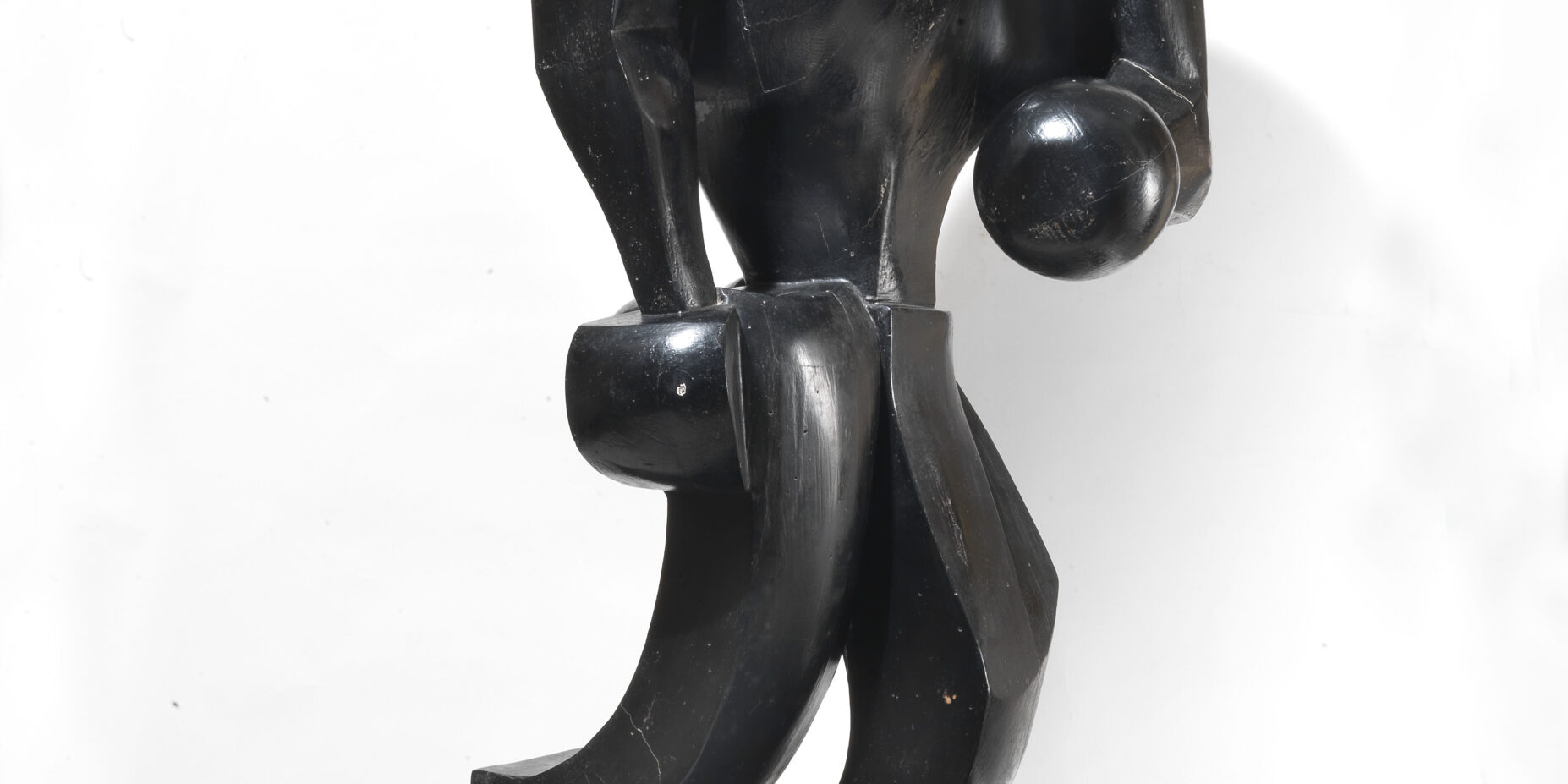 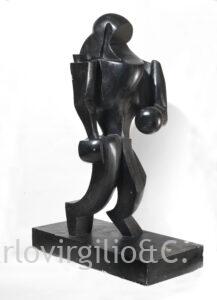 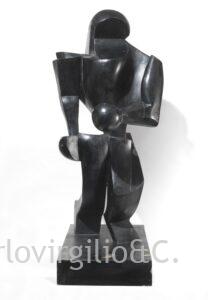 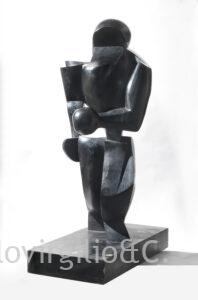 Of the Boxeur by the Ligurian Giuseppe Piccone are known two versions, different for dimensions and pose of the figure. This specimen, the bigger in size, sculpted in solid and patined wood with a black tint in imitation of bronze, is to be considered the final work. To this follows the smaller version with the right foot differently flexed (cf. La ceramica futurista 1982, p. 153; La scultura a Genova 1989, vol. III, pp. 138, 283; Beringheli 1991, p. 244; La ceramica del Novecento 1997, p. 124; Liguria Futurista 1997, p. 127, n. 87; Panzetta 2005, p. 117) in which was identified the model for a ceramic sculpture created by the “Manifattura Giuseppe Mazzotti”, active in Albissola Marina from 1903.

The work is datable to within the first half of the 1930s, a period in which Piccone – about whom the biographical information is still scarce and confusing – joined the Futurist cause. Coming from a family of potters tied to tradition, owners of a factory active in Albissola from 1856, Giuseppe Piccone worked closely with the futurist Tullio Mazzotti, better known as “Tullio d’Albisola”, a soubriquet given to him by Filippo Tommaso Marinetti. In the Manifesto futurista della Ceramica e Aereoceramica, published in the “Gazzetta del Popolo” on September 7, 1938, Piccone is in fact cited – together with such prominent figures as, among others, Fillia and Lucio Fontana – in the list of collaborators of Tullio d’Albisola in the “Futurist workshop on the Sansobbia […] founded and directed by the great potter Giuseppe Mazzotti dean of Italian potters and glorious craftsman” (d’Albisola, Marinetti 1938). In 1934, the artist had already taken part in the exhibition Les Aeropeintres futuristes italiens, inaugurated on May 30th at the Hotel Negresco in Nice.

The Boxeur demonstrates how Piccone thoroughly embraced the concepts of the Futurist vanguard and in particular, those expressed in the manifesto of ceramics, in which he declared his desire to achieve “ceramic simultaneities of contrasting or harmonizing states of mind […] using lines-force, tones lacking in realism, forms and colours that are not narrative or descriptive but suggestive» (d’Albisola, Marinetti 1938). The image of the boxer is in fact given through a vigorous geometrization of the forms, devoid of descriptive and decorative elements, the monumentality of which is enhanced by the black of the patina. On the compositional level, Piccone seems to have been inspired both by the contemporary sculptures of the futurist Mino Rosso, and those, of twenty years before, by Umberto Boccioni (note that in the manifesto of ceramics both artists are given a leading role in the genesis of the theories enunciated). The forward motion of the Boxeur brings to mind Boccioni’s masterpiece Unique forms of Continuity in Space (1913), reinterpreted in the light of subsequent Futurist experience, from Depero to Thayaht.

Even the subject is fully in line with the Italian sculptural production of the ‘Thirties, both of the avant-garde and of adherents of the rediscovery of classicism: the exaltation of sports and physical education, in a period in which the fascist government committed many resources to the reform of youth education, deeply influenced the artists (for an in-depth inquiry see Panzetta 2005), inspiring them to the creation of numerous portraits of athletes immortalized during activity or at rest, among which should be remembered those of the “Foro Mussolini” (today “Foro Italico”) inaugurated in Rome in 1932. In the same period, Piccone himself created such other works on a sports theme as the Rameur (Rower), exhibited in Nice in 1934, or again the Boxeurs presented at the exhibition of the GUF Savonese in 1935 (the work was displayed with another sculpture, Mother and son. It cannot be excluded, however, that the Boxeurs is in fact the Boxeur here discussed, though in reviewing the exhibition, the critics, seem to be describing works inspired by a new realism, cf. La ceramica del Novecento 1997, p. 124).