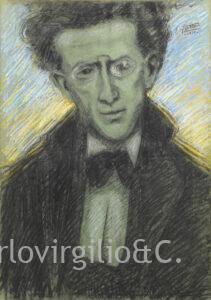 Pencil and pastels on paper

At the turn of the twentieth century Dottori trained at the Academy of Fine Arts in Perugia, a glorious institution that the trainee futurist soon criticised for its antiquated teaching, in fact learning a great deal more than the rudiments of drawing and painting, to the extent that later he had to recognise that the school had taught him a  “trade,” thus allowing him to support himself from a young age by painting putti and grotesques for interior decorators. Besides having innate skill, he initially learnt drawing by copying the plaster models in the shop belonging to an antique expert where he was employed as an assistant when little more than adolescent, and afterwards at the academy in the continual copying of German prints, when in vain he would implore his teacher to let him copy leaves and flowers direct from nature.

As is well known, by 1911-12 Dottori would already be a futurist and from the early twenties a prominent futurist, because in between the Great War broke out. He took part in the war, but without any enthusiasm for “the cleansing of the world.”

The futurist explosion and the establishment of Aeropainting, of which he was one of few “inventors” and then the central figure, certainly did not induce him to abandon drawing and among his papers there are not only portraits and landscapes, but also futurist compositions (cyclists and motorcyclists) as well as Aeropaintings (landscapes with lakes and rivers seen from above and in movement).

Dottori’s debut not only included practical art but also artistic theory and group activity. One of the first futurist circles in Italy in the second decade of the twentieth century was that in Umbria and taking part were artists, aspiring artists, writers, poets and intellectuals.

He remained friends with many futurist colleagues for decades beyond the movement. Almost all of them had their portraits painted by him. Among the first to be rediscovered from his graphic repertoire are three intellectuals and “pre futurists,” the Florentines: Carli,  Settimelli and Scattolini, who ran “La Difesa dell’arte” (the defence of art) in which Dottori collaborated, drawn in 1908, demonstrating his precocious interest in the artistic avantgarde.

In Perugia, his closest companion was certainly Alberto Presenzini Mattoli, (Orvieto, 1892 – Rome, 1984). A student at the University of Perugia, in 1913 he promoted “The Refractory One” “against all the old, moth-eaten schools” but he did not agree with certain radical positions of futurism. With Dottori and the others in the group he opened a debate in the newspapers that would be won by the neo futurists.

Presenzini would become a tenacious promoter of futurism from the blazing futurist evening at the Politeama Turreno of Perugia with Marinetti and other figures in the movement. He would then develop an intense journalistic activity, publishing “Parole in libertà” (words in freedom) and founding newspapers. At the end of the war, in which he could not take part because he was not eligible, he and Dottori would found “Griffa!” the futurist review – but not only – which had a national following and in which the major futurist exponents wrote, beginning with Marinetti. He published poetry books, theatrical texts and novels and wrote for reviews throughout Italy.

This fine portrait of the Umbrian writer, drawn in pencils and pastels, is the image of a young intellectual in a pensive attitude, wearing pince nez, elegantly dressed, with a loose black tie to close his shirt. The background of the portrait is stringily divisionist with diagonals in blue and yellow with white highlights that light up the face and capture the light that refracts on the lenses.

The work, of large dimensions, has a history that can today be definitively clarified.

In the large monograph by G. Ballo (Editalia, 1970) the original of this work is reproduced in black and white as an entry in the autobiographical notes with the caption: A. Presenzini Mattoli, pastel, 1926. It is the reproduction of a black and white photograph from the early nineteen hundreds (with no signature or date to be found), on the back, in the hand of the artist, are the words: “Gerardo Dottori, portrait of the poet Presenzini Mattoli, pastel 1914,” hence, whoever compiled the catalogue did not read the handwritten text on the back of the photograph, today conserved in the Dottori Archives. In its current state the work has the signature of the artist at top right and the date 1929. The writer’s daughters, who were in touch with Dottori, recount that he was asked, probably in 1929, to restore the paper because of what was described merely as damage. In fact the futurist did not limit himself to restoration, but took the opportunity to make some improvements that come to light in a comparison with the image in black and white of the original version: some highlights are accentuated and some background lines modified, while the highlights on the lenses have been scumbled and in the definitive version the signature and date 1929 appear at top right.

So Dottori wanted to underline the changes made fifteen years after execution by adding his signature and the date. The confirmation that the original version is from 1913 can be seen from Presenzini’s face; when compared with drawings and photographs from different periods, it is most compatible with that of 1913.

This work is one of the six portraits that Dottori made of Presenzini Mattoli, and the most interesting for both size and use of colour. The others are caricatures, essential illustrations and contextualizations in rustic surroundings. That of 1924 reveals the face of a more mature man than the subject of this text. Hence the work should definitively be dated 1913 and 1929.

For further information, to buy or sell works by Dottori Gerardo (1884-1977) or to request free estimates and evaluations