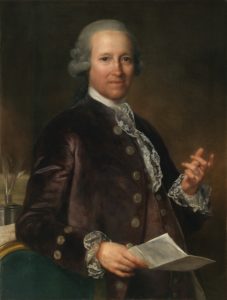 Three particularly interesting points converge in the portrait being introduced here once again: stylistic, historical, and concerning the painting’s recent provenance. It comes from the collection of the most versatile, universally educated and knowledgeable English art historian, specialist for the eighteenth century: from the collection of Hugh Honour (1927–2016), whose many books, essays and catalogue articles on the history of culture and collecting, on painting, sculpture and the decorative arts of the settecento are among the most influential publications of the last century. It is no wonder that Honour had purchased the portrait of a man who, although trained as a painter, became the best informed guide of rich tourists on the Grand Tour, especially through the Rome of the eighteenth century. This was an activity that in a short time groomed him into one of the cleverest and thus wealthiest art dealers, antiquaries and exporters (official and clandestine) of primarily antiquarian artefacts to Northern Europe. He and his Scottish colleague and rival James Byres (1733–1817) represented the epitome of so-called Roman virtuosi as they were also described in Goethe’s Italian Journey and both in fact portrayed by Anton von Maron. Goethe went with his friends to Castel Gandolfo in October 1787 and described the convivial atmosphere of an autumn sojourn among his friends: I wnt to Castel Gandolofo (….) A wealthy English art dealer, called Mr Jenkins, was living there in an imposing house which had once been the home of the Jesuits. It has plenty of accommodation for guests, salons for gay parties and covered walks where one could stroll in cheerful company (465f missing). Angelika (Kaufmann) is also here and lives nearby; there are several lively girls, some women, Mr von Maron, Mengs’s brother-in-law, and his wife, who are either living in the house, or the neighbourhood. We are a merry company and there is always something to laugh about. In the evening we all go to the Comedy … 457 f.
Maron’s portrait seems distinctly earlier in style than the one of the English art expert that was painted after 1793 for the Accademia di San Luca in Rome, which shows a benevolent, approachable man smiling slightly at the “visitor”. Determining age in Maron’s portraits by basing it on physiognomy is often misleading, as is often the case in neoclassical portraits; Maron was especially prone to rejuvenate his models and “tighten” them up, both those of his fellows and companions and of his many self-portraits. Hence a date oriented on the costume might perhaps point more accurately to the late 1770s. It could have been painted somewhat earlier perhaps than the well-known anecdote – a rather embarrassing situation for the nature expert Goethe – when, in October 1787, the latter returned to the Jenkins household from an extensive hike around Castel Gandolfo carrying a load of mushrooms he had collected. Without informing Jenkins, he handed the delicious gatherings to the cook, yet another expert, this time in preparing mushroom dishes. Apparently the master of the house was much offended and extremely resentful towards the poet. Maron might have infused the formal portrait shown here with something of the arrogant and self-important attitude of the successful and unscrupulous Jenkins, even if such a psychological interpretation of the art dealer’s rhetorical hand gesture might be incongruous in the context of late eighteenth-century role portraits. Conspicuous for the viewer is the welcoming gesture of the success-pampered, elegantly dressed connoisseur, who is quasi greeting the visitor in the midst of “erudite” books, writings and letters in a friendly but distant and rather formal manner.